Fatman in Black and his Seven go Sprinting

So this will be a very irregular and self deprecating look at the 2016 Speed Championship from an aged Fatman and his new Black race suit !!!

Over the years my Seven has been either an SV ( Zena) roaming Glen,Mountain Pass or B road anywhere and everywhere ,and then after a brief break I gained a more Track focused version (FiFi)

When the regulations in Class 5 opened up a bit this year and FiFi was not over powered all the signs pointed to a campaign to make the likes of Simon Rogers , Mark Durrant and Shaun Elwell realise what true driving potential was - I can hear them quaking in their little piixe boots now ( guess you do quake when you laugh too much)

So that's where we are up to . Hopefully I will remember to post and encourage other novices to follow through in the future

Meanwhile in other news I have lost more weight - so this sizee 66 race suit will have a Jaques Villineuve swagger to it ! Alternatively it s a visit to a local seamstress !

And somehow I have talked myself into a covered trailer ! from the guys a GT-R trailers in Newark

Lesson one is many of the Championship entries come in a bunch - so far this week I have paid for 2 Curburgers , Loton , Harewood and Goodwood -Contemplating Aintree as well

So if you think you will pay for the entries on a gradual basis you need to do that over the winter "off season" in advance and put in a separate account !- Thankfully that was one of the best bits of advice I received

there is now a swear box for the following words / phrases

apparently its all I am talking about

turns out it was one of my better ideas as the rear ARB drop links had some play in them , granted I am stuck with them for a while , so tonight's quiz is

Why is Delbert not fitting new links

1) the old ones look prettier

2) they do not do anything anyway

3) Caterham are out of stock 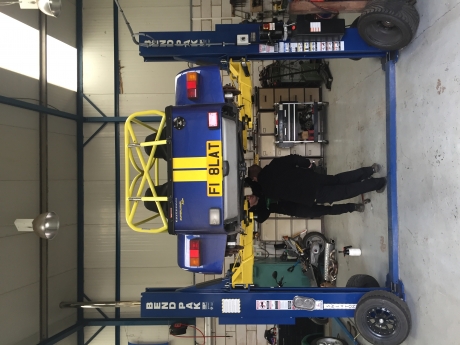 And working on the 12 hour Bottle to throttle rule that a aged pilot taught me I will have the first sober Friday night in , well I cannot remember when as I will be setting off at the crack of sparrows (

Then The Fatman starts a diet weighing in on Sunday morning

Many years ago controlling slappers meant something completely different to coming out of a corner and trying to apply 279 bhp in the wet !

For a track day warrior to see how sprints are a compromise in all things , attack of the corner , the line to take , braking points etc balancing the perfect exit in one corner with the perfect entry into the next

My Swiss finishing school only taught me how to leave a sport scar in a skirt. But every car had doors !!

So the list before Loton is yellow tape for the earth lead, a copy of insurance , Road fund license , MOT

All of which are electronic so need printing off .

Granted I have 2 more test days before that- Dry would be nice !!

I am beginning to realise that the logistics / organisation and timing of the season is as much part of the challenge to actually getting across the finish line !

nearer to home , FiFi is up on the trailer ( actually never really came off after Curbotough )  and ready for Blyton test day tomorrow

Sun is shining , tyres need shagging and the GoPro needs to be set up

all this activity is not good for a Fatman

So the Fatman went to Blyton today and learnt the following

1) as usual it's cold on Lincolnshire Airfields . Next time you see a film about air crews in WW2 sitting in deck chairs drinking Ginger beer and playing cards I suspect the airfield is in Sussex . If it was Lincolnshire the pilot would burn the cards to generate some heat

2) following others on track they seem to have found another 6 ft on the track width , seems I may be great at hooning around Blyton but sprinting is all about sacrificing the perfect corner to be faster in the next one and getting the one great lap as opposed to having a great set of laps . Also I need to realise the white line is a suggestion , at least two wheels need to travel over it ( or so it seems )

3) the craic in the paddock goes to show what the club is really about - using our cars as intended with a travelling group of like minded people who meet up,once or twice a month and enjoy themselves . Perhaps the sprint championship is just another area , just it roams a bit

4) CR500 cold and straight onto circuit scare 10 ways of Billyohhhhh out of the driver . So warm tyres are for poofs !! ( seemingly the MSA agree as warming tyres is not de rigour anymore . So job vacancy - hoon FiFi to give me warm tyres

it is all getting rather real now

my first tyre mullahed on a kerb meant a hunt for a couple of Front CR 500s , luckily sorted

Hepburn , the ever faithful hound  cocked his leg

Car is all prepared and all the paperwork printed off ready

Ahhh so not repacking the exhaust makes for a noisey car

So I will be missing Hethel , Gurston and Castle Coombe

Only Wiscombe is to be decided upon

Just seen the weather forecast - Snow on Saturday Afternoon and a nigh time temp of 2 degrees - Guess who is not looking forward to a night in a tent !

Snow , I ask you , feckin snow

not sure how that happened , guess the tent did not want to get wet !

So first event over - Loton Park was certainly an initiation

The easiest bits were the bits I was most worried about - The signing on , scruitineering , finding a paddock spot etc

As for the driving - well I have never braked so early , on my first run I was braking so early that I was accelerating into the corners !!

So looking to some positives

1) Every run was faster than the previous

on one run I started obsessing about some mud that was on my tyre prior to my run !!!!

On track you build up to fast laps - here its one run , cold tyres , cold brakes etc etc

OK ,If anyone is reading this may I ask that we share a little prayer about 10 am tomorrow when I get my first noise test ,.........

Meanwhile Miss Daisyis hoping that she runs before me so she does not get balked on her fast lap !

So its been a while since the update-

To say my first time was embarrassing was an understatement !

Have to say I had my first "downer"

But first Saturday - The Marshals sprint

The first time I had some competition - I set my sights on the Novice trophy - 7 of us in total , me and 6 computer controlled Honda S2000

But today was different I was dual driving my car and Rob was running in Class 1 and Class 5 . I also realised that I had been bitten by the bug that is beating the clock .

It was great to see Rob enjoying the power ( over twice his regular car ) and also to get some feedback on the set up .  Also I would get a benchmark on my times - It is all well and good measuring yourself against the seasoned campaigners but getting a time off someone driving your own car , carefully  gives a starting point and at the end of the day I came second by 0.7 of a second - Rob gets a trophy and I realise I am  now competing at a level that would be mid field .

Yes you may have guessed I am hooked