Hi.
I'm creating this post as an alternative to the 620 Cooling thread which now focuses on remedial work being used to correct the overcooling issue affecting the 620.

I would treat this solution and thread cautiously,  I'm not sure what I'm doing.  I don't have the experience or technical knowledge shown by the amazing team in the other thread.  Though I do actively invite input, and critique to help optimize the concept I'm using.

To be clear I'm doing this as I don't have the confidence to remove the intake manifold with all the extra ancillaries it has on the 620 due to the supercharger.  This confidence may change over time, and I may fit the solution that the team have come up with.  I'll probably purchase the parts and leave them on my workbench attempting to find the bottle *irked*.  For the time being, I'm going to try an easier approach and compare the results.

The approach I'm using is to install a coolant bypass in front of the hot side of the radiator, diverting coolant sub 89c from the radiator back to the thermostat housing.  Coolant over 89 will be sent to the radiator and then back as normal.

The team in the other thread have confirmed and also acknowledged by Caterham Cars part of the overcooling issue is due to coolant pressure forcing the thermostat in the OEM housing open.  Nullifying its presence, ie it appears stuck open.  I'm therefore going to leave the OEM thermostat in place.  The thermostat used in the OEM housing receives the pressure at the rear of its surface, hence reacting the way it does.  The bypass housing is a T junction, my hope is that the pressure will behave differently in the housing and won't force the thermostat into a set position. This might be a failure point in the design.  Only time will tell.

My parts list are as follows, all purchased from carbuildersolutions.

Link to the bypass https://www.carbuilder.com/uk/by-pass-thermostat-87-degree

You might notice I've opted for flexible coolant hoses.  I'm not sure what these are like.  I'm using them as I expect to connect the middle port of the bypass thermostat to the hot rail, and then attach the housing to the cruciform.  As both output ports from the bypass housing are at 90 degree I'll need to ensure I have the flexibility to route the coolant hose around the intercooler.  This might be overthinking things, but I'm trying to predict unforeseen issues.  I think I'll also source some standard silicon hoses in case they fit as I'd prefer them.  Connecting the bypass loop to the bottom T should be simple, but I will need to cut and reuse the factory hose.

I think that covers it, I'd love to know your thoughts.

Mark, when your new stat opens will it close off the new bypass to make sure the coolant flows through the rad?

That would seem to be essential but other than that it looks like a pretty good, less complex, solution to me.

This is pretty much the same as the Rover PRRT set up except that the original stat is removed or the centre bulb and spring cut out. I always found it worked a treat on the K series.

I believe the bypass thermostat will close the bypass loop when it gets hot.  However I've never seen or used one before, so I might be wrong.  I'll drop it into a bowl of boiling water first before installation to see what it does.  Even if it doesn't completely close, it might still be enough to keep the temps from falling too much, of course that scenario might be an issue during extended track use.   But that's an unlikely scenario for me.

There's a handy picture, from the suppliers website, it's this logic I'm working on. 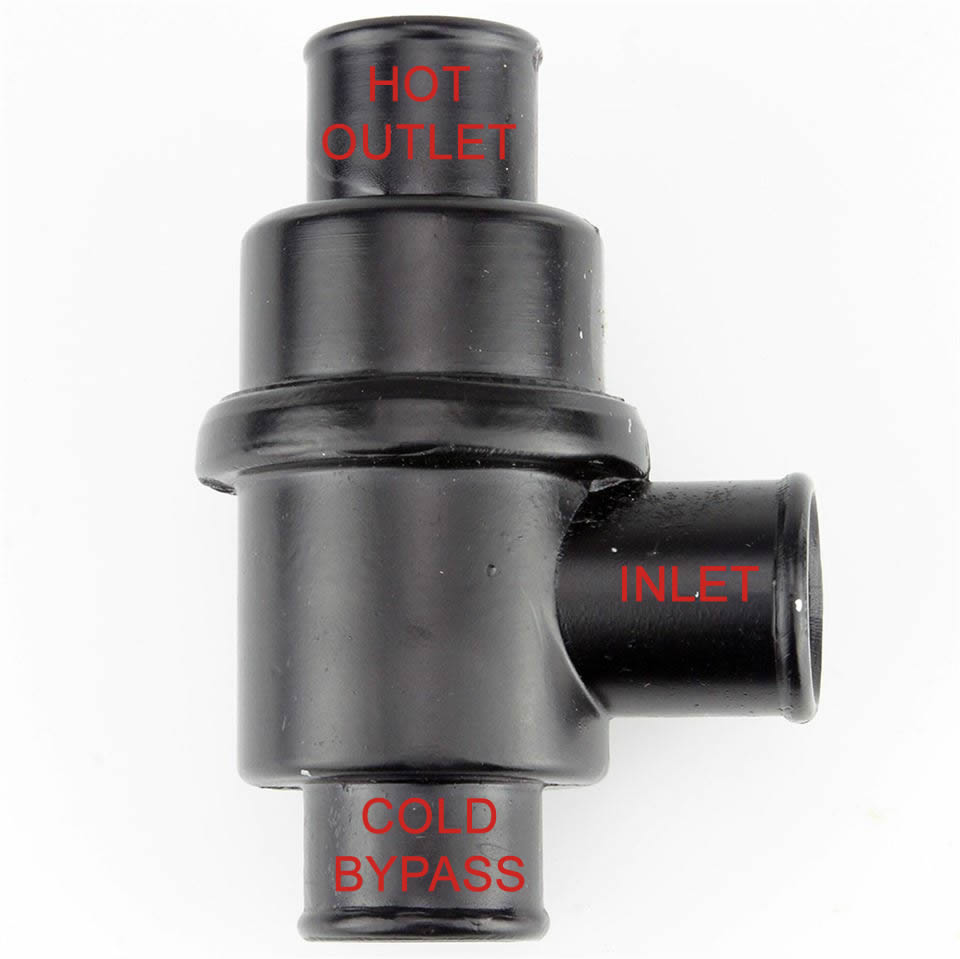 Ah, I’d seen that in the website but not with the in/out marked.

I would think that would close off the cold bypass when the stat opened.

One comment on your initial post , you say that you think the OEM thermostat is being forced open by the water pump pressure causing the cold water to flow , Based on what we've found running our modified design in the other thread  i don't think that's the case , the cold water flows in the OEM set up because of the big machined cut out in the housing, its akin to trying to fill a bath when you've left the plug out , the water keeps escaping  .

Have a look at this picture and you will see what i mean . 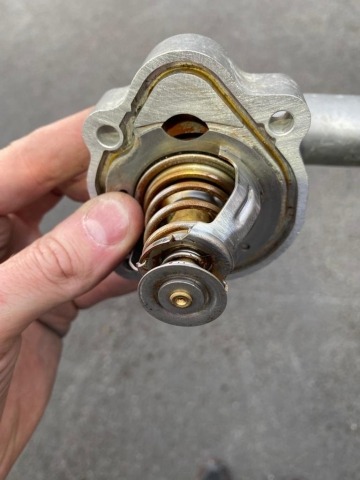 Good luck with your alternative solution , Just have a think about what the effect of having the original thermostat left in position might have on the way the system responds , each thermostat is going to be responding to different sources , personally i think you need to remove the OEM stat if you are  fitting a remote one .

How will carrying out this modification effect your CC warranty ?

Ive also just noticed that the thermostat in that bypass unit is 87 degrees , that means that it will circulate water back to the engine until it reaches quite a high temperature . The standard 620 thermostat is 82 degrees , just check you wont have a miss match with the fan switch on setting on the ecu . If you do the fan may run continuously .

The remote stat idea should work but you just need to think through all the affected issues .

During my email comms with CC, they replied with the following statements, who knows what to think.

Lee Bristow (Dealer Support Engineer) "However even with the thermostat fitted, it has been proved that the force of the cooling system can force the thermostat open and begin to bring the temperatures down prematurely. In an attempt to prevent this, we now remove a small section at the top of the thermostat, to act as a pressure bypass and allow a small amount of coolant to pass though, which I believe is what some people wrongly determine as being the thermostat failing and sticking open."

Lee Bristow (Dealer Support Engineer) "Duratec engines are renowned for forcing their thermostats open. We think that they even do this at high revs in the standard Ford application, but the duty cycle never reveals this; plus the wide-band ‘normal’ of the temperature gauge means it would be hard to spot. We have looked into solutions in the past and one thing that was tried with some success was pre-loading of the thermostat spring, to enable it to better resist the high water pressure. Without significant testing (which is always a challenge for us), it is not really suitable for rolling out into production. However, I think that we could probably provide you with a special order thermostat that would more closely match how you use the car."

I told CC I wasn't prepared to do their testing for them, they didn't have another offer so the conversation dried up.  Also surely if you preloaded the stat, and there is low rpm, will the extra tension in the stat keep it closed, causing overheating?  Oakmere wouldn't help either unless I complied with the modified thermostat from CC.

Just on the topic of two thermostats, surely the additional one is only controlling flow around the radiator, rather than what is entering into the engine.  It is possible I'm completely missing something?  I might be misunderstanding what is happening.  I'm still not comfortable gaining access to that area either.  If I could get that far I'd be waiting for your solution at this point,

With regards the higher temp stat, yes it would be better if it was 82, however the stat in the 420 is higher, so I'm working on the assumption the engine will be happy with it.  If I could find an 82, I would use it.

Warranty, hmmm.....  Yep and this is the part I have a significant beef over.  60K on a car and I have to kiss good bye to my warranty after 700 miles.  I'm writing off CC and Oakmere, their handling of the situation has been a disgrace.  Oakmere won't see me through their doors again.  My 620 will be serviced by an independent only.  I think it's scandalous.  During the earlier days of the other thread someone mentioned a comparison with Porsche GT products and problems they had with engines denotating.  The difference, owners didn't need to intentionally denote their warranty fixing the problems.  Any how, I've accepted who I can trust,  CC and Oakmere aren't on that list.  Seven ownership will be independent only from this point forward.  But let's not get into this topic.

Guys, if you think my plan is flawed or a bad idea please let me know,  it is possible I've misunderstood the entire circuit.   I'm not going to be offended. I'd rather know.

Igors fitted a larger water pump pulley which reduces the water pump speed , this might help with any issues of the thermostat being forced open at higher revs . Ive left mine as standard at present to see if there's any difference in performance when all the other parts are similar .

Don,t forget in the standard CC system on the 620 there's no volume bypass ( only the small diameter  bleed to the expansion bottle ) so water has nowhere to flow when the thermostat is closed, This might cause it to be forced open.With a proper, larger diameter  bypass from the rear water outlet on the block back to the pump the water can circulate through the engine without having to force a route elsewhere . Thats the main reason we ended up going for the solution we did .

I will have a look at the standard CC map settings for you tomorrow and tell you what the fan switch on setting is .

The standard OEM thermostat is operating against water temp on the engine side of the stat , its expecting the rad feed temp to be lower .

I repeat what i said earlier , i think the remote stat solution could work but i have reservations about leaving the original stat in place .

https://www.eliseparts.com/shop/engine-br-gearbox/cooling/pressure-relief-remote-thermostat-kit/ This appears to be 82 degrees