Following it closely.  Mrs Pugwash and I watched several of the Portsmouth rounds last time and then flew to Bermuda for the final.  The coverage is on Sky Sports Mix (available for anyone with a sky subscription) so we record it and watch the next day.

Great start for Ben and Britannia.  As a sailor the technology is amazing!

My only source has been YouTube.
It's amazing we used to win races at 6knots! So last century now

Todays highlights are worth seeing Day Three highlights if you are not interested in the sailing just skip 22 minutes into the video.

Wow that was exciting.  It is good to see that what looks like a commanding lead can be lost very quickly.  I think i recall the last series as being pretty much over once a lead was established. (with a couple of extraordinary exceptions)

Good to see a full, all teams, support to stop the boat sinking.

The capsized American boat Patriot has formally dropped out of the Prada Cup leaving Team GB and the Italian Luna Rossa boat to fight fight for the Challenger position.  With Ben Ainsley's success of 4 out of 4 wins means he only needs to win one race and they are through.

I always wonder how the Host Team prepare for the big race when they have not had the experience of the Prada Cup qualifiers.  Tuning how the boat teams function even if the boats aren't changed.

It is not quite that simple, the winners of the round robin series they are doing at the moment just gets into the Prada Cup finals. Then they could lose in that final and never make it through to race against the Kiwis.

At the press conference yesterday American Magic was aiming to return the the Prada Cup Semi finals on the 29th, I have not seen anything to say they have dropped out completely yet.

Merde,  that is more complicated than i thought.  Thanks for the correction.

I have to say the acing has been more exciting than i thought it would be. Such big shifts in the lead due to errors that drop the boats of he foils is very tricky

A great race. It takes me back to having a go on the old school 12m boats as a punter some years ago.

If you ever get a chance, the 12m challenge in Cozumel or St Maarten gets you into a race between two 1987 Americas cup boats (we did it in Cozumel), although they are only doing half the speed of the modern hydrofoils it is still an amazing experience, When SWMBO and I did it in Feb 2017 we picked True North IV (being the Canadian boat) and I took one of the Main Grinder positions, she took Time Keeper to call the start. You run a full race to the exact rules of 1987 with a chase boat and umpire signalling the start and finish. It is not clear whether the company operating the events has now consolidated in St. Maarten, they used to have 2 boats in Cozumel and 2 in St Maarten, but Covid has shut down operation as they were very dependent on cruise ship passengers.

As you are thrown together with a bunch of other punters for the event with half an hour of dry land prep, you have to quickly become a team on the winches to work them smoothly and rapidly. The skippers are well qualified and very competitive, with no holds barred with fair tactics to win the race. In the end we led by about 5 seconds for most of the race, but had to sweep a bit wide on the last tack, giving the Stars and Stripes an inside line to the finish line and a win by 2 seconds. At times you are quite close and some of the crossing tacks bring the boats within 10m of each other with high-speed passes behind to gain position advantage being quite exhilarating.

I was actually scheduled to go out on the Oracle boat in 2013 while we had an Oracle Executive meet-and-greet in San Francisco, but the day before the event was the day of the unfortunate accident with the Swedish boat capsizing and the British crew member being killed, so all teams suspended operation out of respect.

I'm easy to spot here with some branded head gear: 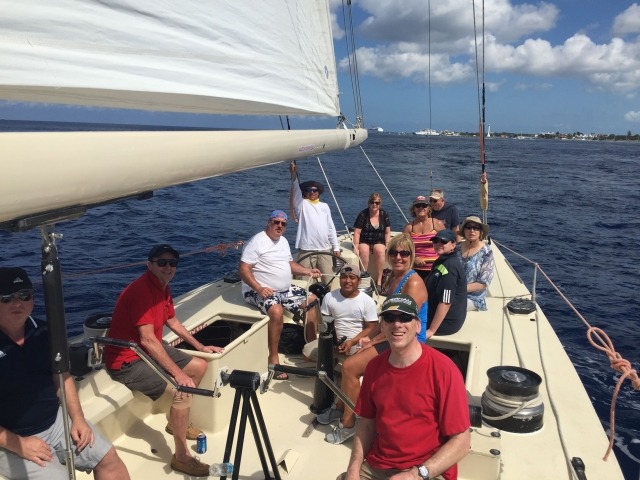 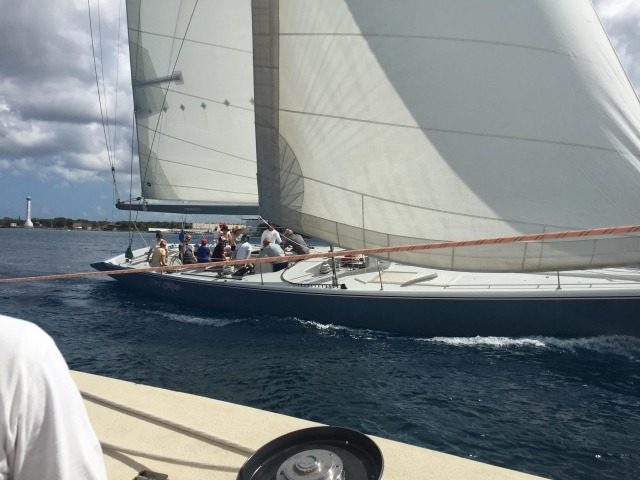