Wild Bill - please spare us the saloon bar insults and generalisations please. I worked in the public sector and  I am proud of the  work  I did - from the legals on 100million plus outsourcing , to JVs with private sector partners and child and adult care work , over 30 odd years.  Don't tar us all with the same brush please -nobody is more appalled at some of this government's  balls ups than I am . I don' t want to have to list a litany of the many crap private sector firms I encountered,among some very good ones , by way of riposte

I don't think its a recent phenomenon. The big difference is that it's easier to hold the private sector to account especially if they are smaller operators

It's actually far easier to hold public sector bodies to account Bill - our friend Hancock excepted. Private companies aren't subject to procurement regulations which are designed to promote transparency and fairness . Nor are they subject to Freedom of Information requests , nor judicial review , and are accountable to their shareholders, not elected members and the electorate at large . F o I alone accounted for my grey hair .. .

As a quick aside John as we are now well OT, again my experience (on more than one occasion) is that when attempting to hold the transgressors to account (and even with proof gained through FoI) We were constantly rebutted and ignored until financially it just becomes 'not worth the mental damage or the continuing cost'  and they know this, it's why they do it. They add to the insult by telling you they are following 'Due Process' when it can be shown quite clearly that they are not, they are following their due process, which is a different thing entirely. I have call recordings on one particularly sore issue which proves my case but can't be used because it was recorded without the other parties knowledge.

The perpetrator of that issue is still in position, still supported by the governing body and still abusing frontline staff...badly. At least 2 others have tried to take action and have failed because of the above. It continues and it's widespread in that field.

So nothing will happen to Hancock. He 'might' lose position but it will be temporary.

You could accuse me of being jaded and cynical on this topic....sadly you'd be correct. On a happier note i'm really positive on other stuff to make up for it.

The cost of "saving Christmas" 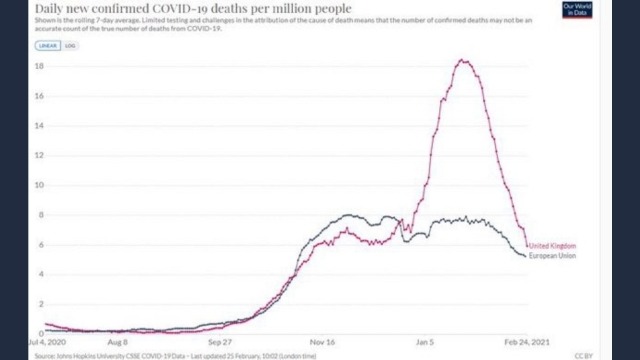 You assume that people followed government guidelines/advice and that is not simply the result of all the people that ignored everything and did as they wanted.

Online
Last seen: 1 min 40 sec ago
Joined: 17/04/2014
I think people have generally been following the rules. The UK performance is a combination of the rules which applied at the time and the Kent variant of Covid.

"not simply the result of all the people that ignored everything and did as they wanted."

That spike includes those who were admitted to hospital for non-Covid related reasons and picked up a fatal dose as a result. Including at least 2 people that I knew. We may get the full story within my lifetime but any inquiry will be held up for years while those at risk of prosecution demand a get out of jail free card before giving evidence.

We've been lucky on IOM for last few months ,poss max five cases all in isolation ,,most with people coming from UK ,then testing positive ,,hard to get here  as you have to get government permission to come and you have to isolate for three weeks when come plus have three test over three week ,,

but few days ago as Liverpool  ferry to island is half Manx sailors plus other half from Liverpool  ,,,and they don't think  they should isolate ,one of Liverpool lot tested positive passed it on ,,we have now got 46 ,all positive tests linked to that bloke ,,plus on radio today ,,two more positive but not found out were from ,plus one other tested positive just come from UK ,,all isolating ,so we now have 49 ,positive here ,,so on radio today pubs ect close plus restaurants,,not legal ,but most closed

will be further announcement  tommorow ,,as to what happens

just proves how easy it is passed on ,,and UK wonder how it's so bad ,,the way they disobey rules and don't give a toss about police ,,no respect

my answer simple BIRCH THE BASTARDS   If they disobey

im pissed of cos had table booked for us and kids for meal tonight ,across road at the raven pub and may have partaken in a little drink ,,,just to be sociable,,