They'd probably plant operatives to sow dissent across internet forums by endlessly whining about whatever happened.  Hang on!  Are you guys spies?

Not a spy, just hoping for a genuine answer.

The voters were misled and those voters are too stubborn to admit to it.

Ths younger generations are going to be paying for that stubborness for many years.

We wont get a sensible reply as there are no reasons to leave which stand up to scrutiny, they all require belief.

The experts are still happily explaining how the UK economy works should anyone be interested in how Manufacturing might be hit in the various scenarios ahead of us.

I fully appreciate that Reuters are "mainstream media" (i.e. they check their facts) but this news scares me.

Note by "Australia terms" the Prime Minister means "World Trade Organisation basic terms" i.e. No Deal. As ever Johnson is clever with words and he is trying to mislead us, to camouflage what is the underlying truth.

From the article linked to:-

"Australia does not have a comprehensive trade agreement with the EU. Much of EU-Australia trade follows default World Trade Organisation rules, though specific agreements are in place for certain goods."

So potentially he's referring to having some specific agreements and everything else WTO rules.

As was always the case though, it would be lunacy to publicly announce that you wouldn't leave with 'no deal'.  That would remove any incentive for the other side to negotiate with you.

But we've already left. We have no leverage.

On that basis, nor has the EU.

We have had Norway+ and Canada++ as theoretical deals. Are we doomed to Australia--?

Since the referendum this is the first public report of an Australian style deal. In four years, we have sunk from a variety of comprehensive preferential deals to "specific deals on certain goods".

"We don't like being governed by an unelected Brussels elite."

What we really wanted was to be governed by an unelected British Elite, I understand it all now.

For anyone who can access Twitter, I recommend this long thread. The poster is based in the Dordogne. 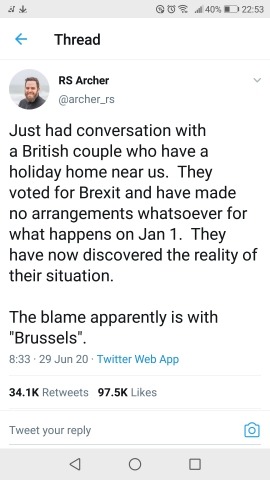