One for the astronomers (or physicists)...

Yesterday, on a very clear and dark evening (in SW France), my wife spotted something unusual in the night sky -- a double image of the crescent moon.  I saw the same thing.  (And no, neither of us had been drinking.)   Other objects, such as distant trees and buildings, all appeared as normal, single images.

When I looked at the moon through binoculars, the double image was the same.  But when I looked through just one eyepiece, the moon appeared as a single image.

Foolishly, I didn't take a photo, but it was something like this: 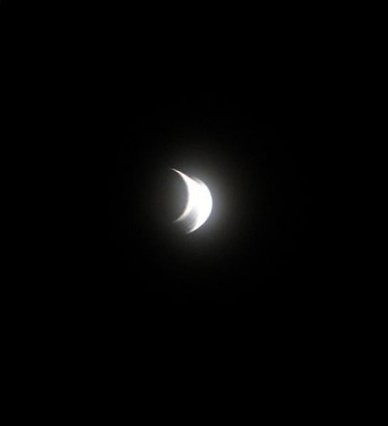 What was going on?  Some sort of refraction, perhaps?

Try Barnard Castle, it`s free and you can do it under lockdown! (sorry!) It`s a bit of a way from France but apparently it works well!

21st Dec this year is the time to watch the early morning Moon. There is a major conjunction...Moon, Jupiter and Saturn all together....hasn`t happened for 400 years

Thanks for the Specsavers cracks, chaps!

We weren't looking through glass.  This was outside on the terrace.

With just one eye (no bins), it was still a double image.  That struck me as odd.

The images were much the same, just shifted slightly apart, but not overlapping.  The crescent wasn't nearly as marked as in the sample photo I attached (it was a new moon about three/four days old).

Our eyes were definitely not watering!

The Douro Valley is waiting for you

Well, I tried again last night, but could see just a single moon: 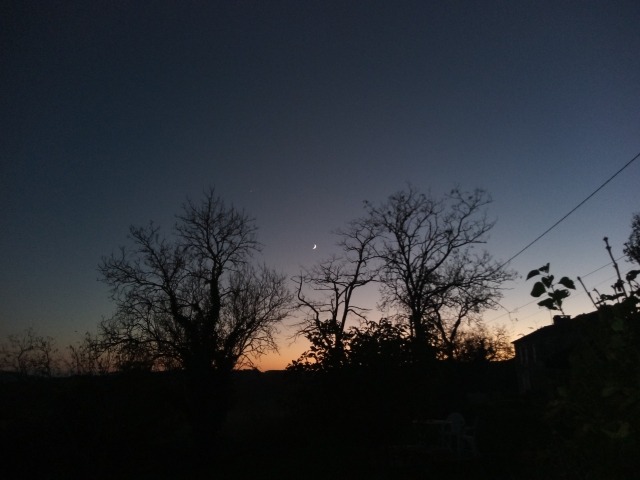 The bonus was that the dark side was lit by earthshine.

I have seen that effect before.   An astronomer once described it to me as refraction.  The light is passing through different air densities and arrives at you in different phases.  Its analogous to a mirage on a hot day.

Of course, you could have also been drinking....

Refraction was my first thought, too.  What puzzled me was that, when looking though a single eyepiece of my bins, I could see only one image, even though I could see two when viewing through both eyepieces, or when closing one eye without the bins.

And I confess to being stone cold sober (it was two clear days before the Beaujolais Nouveau release date).

It looks like you were having an Outer Limits experience?