Sure thing, I get that in the land of the SUV/pick-up truck most owners will pick something similar in the arms race...

But back here in the UK, our urban environment is predominantly built around the size of the horse and cart and subsequently cars the size of the Ford Popular and Austin A35.  Stateside, there is space to be more generous.

What doesn't change much is the height of children. I look at the height of the bottom of the rear window on (just by way of example) the latest model of LR Discovery and that is close to my shoulder height.  I just hope every driver reversing has a rear camera and a dashboard camera.

There aren't many small SUVs that look good IMO but I will definitely go for a smaller one when I don't have a dog. The Macan looks and drives great. I get they are big for country lanes but being higher up to see over hedges and cars coming around bends is a definite plus point. I expect they are safer for driver/passengers but less safe for other car users/pedestrians in the case of an accident. Not sure if SUVs are more or less prone to accidents than other vehicles. Might have a google later.

Compact SUV's don't offer a whole load of space and so I can understand why a family with more than 2 kids would want the three rows of seats and boot space that the larger SUV's can offer.

I had seven seaters for a couple of decades and miss them, and the extra lugging space for inanimate objects. But that was two Espaces.

In the last couple of years I've hired a Kuga (as we discussed), a Galaxy and a 2019 Discovery to carry two of us, our touring bikes and panniers around Europe. The "SUVs" weren't in the same league as the Espaces or the Galaxy: higher floors and less space.

I do like the high driving position, but the visibility was again worse than the "MPVs".

What doesn't change much is the height of children. I look at the height of the bottom of the rear window on (just by way of example) the latest model of LR Discovery and that is close to my shoulder height.  I just hope every driver reversing has a rear camera and a dashboard camera.

You have to experience this to get the scale of the problem. And it's with Sevens as well as children. I parked inline behind a Mercedes SUV last year. The occupants were clearly killing time and I asked them if they could see the Seven behind. The driver played along and was very surprised when she got out and checked.

And it isn't just children and Sevens. Try riding a recumbent trike in traffic and spotting drivers' eyes.

Not sure if SUVs are more or less prone to accidents than other vehicles.

Falling over used to be a major problem, probably caused by high mass and primitive suspension. That led to the elk test.

But I haven't checked recently. The handling of that Discovery was excellent but I didn't get any anywhere near a big swerve.

Someone ran an SUV into something else in a winched front three quarter impact. The secondary safety was years out of date. The video should be available.

PS: And, in contrast, most MPVs are ordinary cars underneath.

The handling of SUVs is now very good, especially given the physics are working against it. The adjustable chassis/dampers are worthwhile. Porsche offer free tuition on dedicated circuits to show how capable they are in different circumstances including track and deliberately induced swerves. I was surprised how well it performed. However, with the electronics turned off it was hopeless. I agree they have no place in cities.

This gives a good indication of the view out the side of a RR, 2 mates protecting me after the following experience... 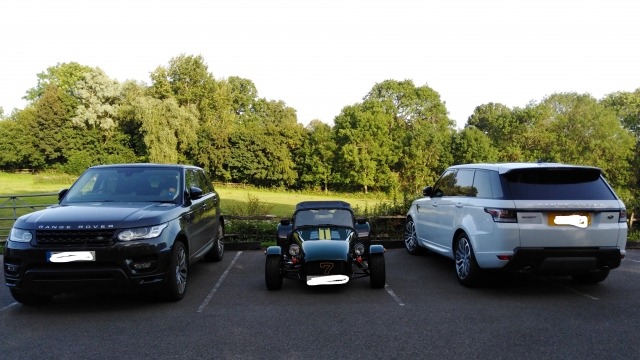 Not here, but on day 2 after collecting my new kit built 7, I was parked and sitting in the 7 in a bay at 90 degrees to the road, nose in. An SUV arrived in the parking bay to my right, also nose in. 5 mins later he got back in, reversed out while turning his wheel to clockwise, so his N/S front wheel impacts right into my rear o/s wheel arch with the associated cracking and groaning, me looking out at his tyre, and up at his passenger!

The twat said he couldn't see me out of his window, yet I was there when he arrived and when he got back into his car FFS!

Think carefully about plonkers like this when parking your 7 next time!

Parking is one of my main worries with the 7.  I usually try to find a spot on the end of a row so the car can't be 'hidden' from view.  I also tend to park near the front of the bay so that people are less likely to deverse into it thinking it's empty.  Probably only a matter of time though.

Just as an aside for those extolling the virtues of their X5s- don’t try driving them through ‘fording water’. Our neighbour has just had a £35k write off of his X5 M50d, he insists the water was only at half wheel height. Speaking to BMW their response was ‘well the X5 is not an off road vehicle sir!’.

Low air intake and the incompressibility of water?