We need a new watch thread!

Tudor Submariner 1993 worn every day until i bought. 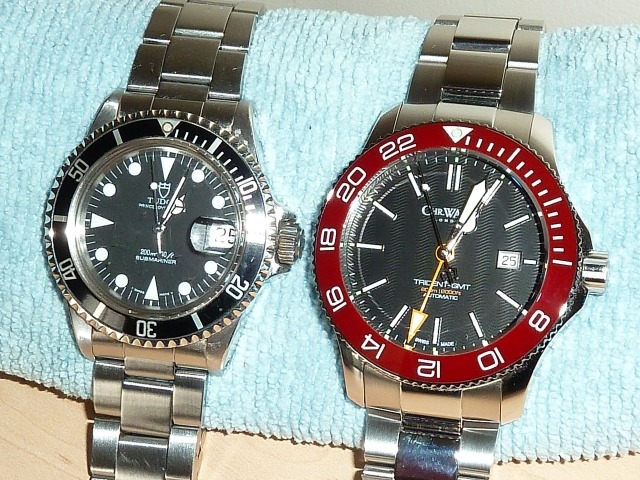 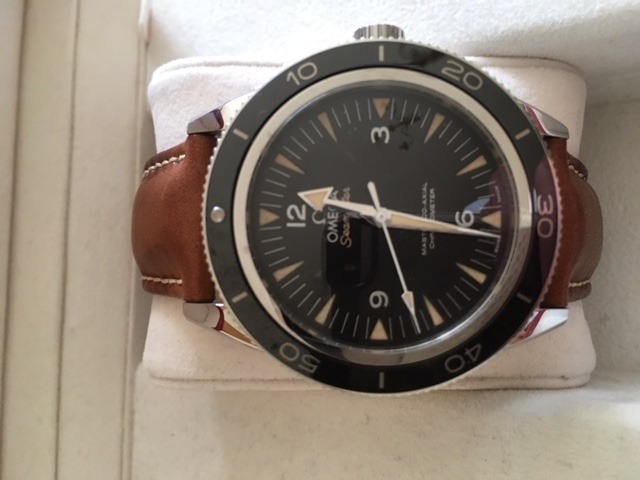 Dave’s photo of his Tudor Submariner has prompted me to dig out some photos of my TAG Professional 1000 which was based on the design of the Rolex Submariner. Bought new in 1991 and worn every day for many years, it suffered particularly badly when I regularly took it rock climbing! A gold version of the same watch was worn by Leonardo DiCaprio for his role in The Wolf Of Wall Street.

The movement died some years ago but as with many middling watches it’s only an ETA quartz movement and nothing special, it did take me quite a while to source the correct one though and eventually had one supplied by a specialist based in California. That then prompted me to get a local repairer to give it a full overhaul and fit a new TAG bezel and glass ... it’s still worth 2p more than nothing but to me it’s got history!

It’s a 38mm case so only really suits smaller wrists, fine for me and particularly my son where it’s become his go-to-watch for the various weddings he’s now attending at his age! 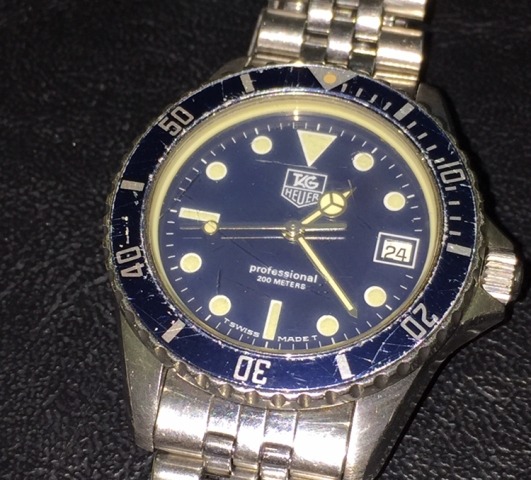 And since it’s reincarnation ... although the bezel is not as good colour match to the face as the original which I still have, even though it’s the correct o/e part ... 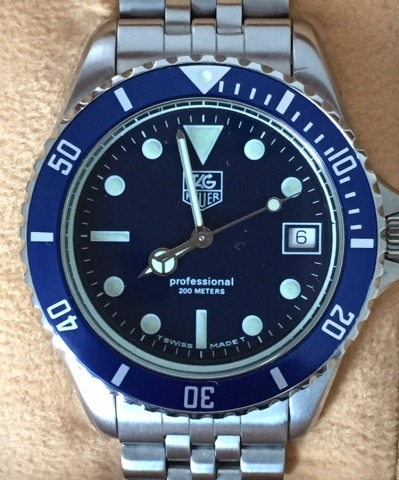 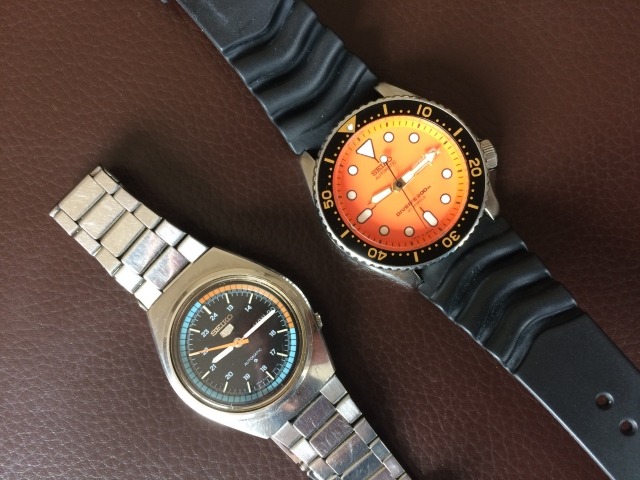 I have my old man's Rolex (given to me after he passed but the old dear has it for now), my great grandfathers silver fob watch which I wore to my wedding and a couple of cheapo dress watches but my 2 favourite watches are my Tag Heuer Professional 2000 which has been my workhorse for 21 years and my Tag Heuer Monaco bought for my 50th by SWMBO 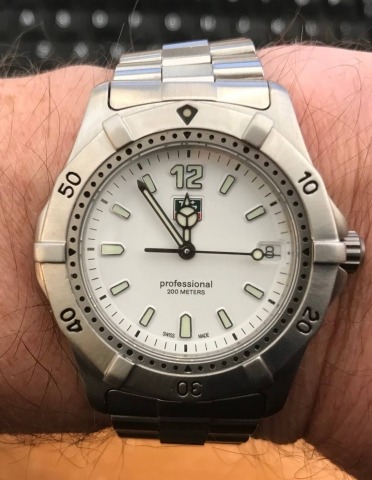 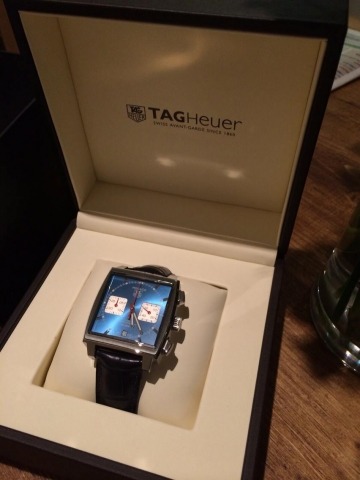 I saw this thread (or the original one back in 2005 or something) and thought 'watches, really?' but over a decade on I now see the attraction.

I love watches, it's a design thing, but it's only recently where I started (was able to) to look at models that are possible investment pieces as much as nice things to have on your wrist.

My dad bought me my first watch (still have it and it works perfectly) - a 1977 Seiko sports Bullhead. Wore it for years until Swatch came on the scene and then a mix of the 'scuba' and 'chrono' things hit the wrist. Then Christopher Ward arrived (to me) in 2007 and a few of those have come in to the household which stated me off. I have a few but my everyday is a CW Trident (black and Orange) with a few other chronographs (and the club one new still in its box).

I have several other Seiko models, Citizen, Sekonda, G-Shock, a couple of old Russian Chronos (I love the aesthetic but bought them when they were a tenner each at boot fairs....now into their hundreds on line...who knew?) and an old Tag Diver (big and chunky, I like large watches) most bought second hand via auction or collectors fairs etc. over the years.

When my dad passed on his lovely 1962/3 Rolex Sub 5513 (non-date) found its way to me - original bracelet etc. but no box or papers (although I have had it recently serviced by a Rolex technician here in Suisse who also got me a certificate of authenticity etc.). Not worn often due to value and age of bracelet but I love it (still with original domed plexiglass). I've bought a couple of bracelets (leather and NATO) for it recently so hopefully i will have confidence to wear it again. Unpolished and original patina throughout.

Speaking of bracelets....my next watch was a Panerai Luminor PAM112, a lovely watch - simple, elegant and mechanical manual winder.  Hard to track down as it has a 'see through' back and are quite sought after as they are simple and devoid of the Panerai 'logo' - just the name and again, I love it. It has replaced my CW Trident this holiday as my everyday watch. The 'problem' (as many Paneristi know...) is that these watches suit a myriad of bracelets, mainly leather, and as such the collection of bracelets grows significantly. Wife not happy

Then I treated myself on my 50th, just after we moved to Suisse, with a Tudor Black Bay Bronze 'Blue edition' (By Swiss dealer/Jeweller Bucherer - they do special editions of certain brands that become collectible). I love this watch too, the blue bezel and face work wonderfully with the bronze, but not worn as much as I would like...the bronze develops a patina over time which is lovely. They do a Black Bay Bronze in 'brown' which is a great looking thing, and a Black Bay in steel and gold (David Beckham advertises the thing which almost made me think twice...) but I've seen it in the flesh and its a great looking watch....one to add to my list.

Looking ahead, I quite liked the steel Hublot Big Bang but seeing how many footballers wear them (especially the IMO hideous copper and black things) I've decided to not go ahead with it. It seems to have become the gold 'Rolex' of our times for those who don't know watches but like bling.

So, three watches I'd like to get then stop. One is Rolex GMT circa 1978/80 with the 'coke' or 'pepsi' bezel. Another is an Omega Speedmaster (large version) circa 1968/9 if possible but a later version with the collectors 'case' would be nice...and a Blancpain 50 fathoms Flyback Chrono which is a very handsome if rather expensive piece. An original 1950 version might actually be cheaper if I could find one...and it was the watch of choice for Jacques Cousteau who is a hero of mine for many reasons.

I'll post some photos when I get my head around how to...

As for toasters, coffee machines and Kettles, Tefal for the kettle and Lidl is our current toaster and coffee machine provider of choice...

Would have loved a Monaco for my 50th but an ES-335 just pipped it to the post!

Had a lovely mickey  mouse one but gave it to one of grandsons.   Only cheap and kept good time.