Hi Folks,
An Evening with Caterham Cars is now live on YouTube and can be found here:

The video is pretty much the whole webinar with a few of exceptions to try and keep the duration down a bit:

For those interested, the results of the messed up second poll were as follows...

Total respondents: 144
Clearly people were confused by the options - unsurprisingly - and so the results are all but meaningless.

Attendance over the time of the webinar: 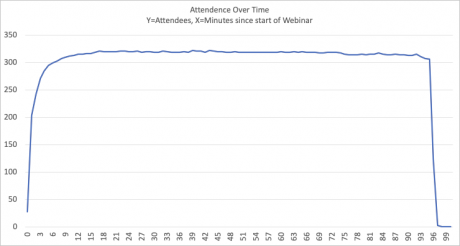 If anyone has any other questions then I'll be happy to answer them... if I can. I also did some interesting (well at least I thought they were) graphs showing how quickly people responded to the polls, in case anyone's interested I can post them.

Thanks for the link ,,,think after hearing Graham speak I think the club has got to hold another vote ,,,sooner rather than later ,,with most people locked down ,,now seems a good idea ,,

think the name must be changed personally,,one thing he said I did not agree with is that with calling the club LOTUS        who are there competitors I don't agree ,,a seven is a totally different car than any of the lotus models ,,there nearest poss is the Elise ,,but I think they are a lot more expensive than a seven ,,and don't think in anyway the seven can be a competitor ,,A SEVEN IS A SEVEN as a lot say when out ,,,how bloody much did it cost ,,,you could have bought a nice car for that ( bunch of total dickheads )         I think the lotus name should be retained ,as think most do it's were the seven came from ,,but caterham name should be the prominent one ( poor old graham nearn kept it going and doesn't  get a look in )  so yes I can totally understand caterhams wish not for us to be called the lotus seven club ,,,,but I think we should still be separate from caterham ,,not going round with the begging bowl ,think we are in a position to finance our selves

Just to throw a spanner in the works I'd love to no what the agro was with the club ,,,as I think caterham cars at donnington would have been the icing on the cake ,,,it was still a great do though ,,,must admit I was heavily critical on BC. about caterhams no show ,,,,but I think I owe Graham and caterham an apology,,which is rare from a Yorkshire man

think I read somewhere soon be big anniversary  of the seven club ,,would be good if sorted by then ,and caterham would attended

Graham MacDonald slipped up an said survival of the fittest and should have said fastest regarding the BBC4 documentary in 2003.

Well, that all looks like a walk in the park, then, John...

Well done to you and the team for getting this record compiled and available.  Good work!

Thank you James, from all us. It was very much a team effort.

What a real insight into the business and what the Directors have to do just to keep the car in production.

May I add my thanks to everyone who was involved in this epic production and to Graham, Simon and David for their willingness to talk so candidly about their business.

Think it showed they would like to get back on good terms with the club ,,,as it should be ,,cos we're there best advert for the seven they have

A really interesting watch - thanks to all who made it happen and put the whole thing together. Hopefully a workable solution can be found that is acceptable to both parties and we can just get on have some fun.

Life is to short to waste on quarreling.

"None of us are getting out of here alive, so please stop treating yourself like an after-thought. Eat the delicious food. Walk in the sunshine. Jump in the ocean. Say the truth that you’re carrying in your heart like hidden treasure. Be silly. Be kind. Be weird. There’s no time for anything else.” - Nanea Hoffman

New member and first post so please be gentle !  Finally got a Caterham  after over 30 years of waiting !

Thanks for putting the Evening with Caterham Cars on YouTube  - thanks to all participants giving their time and for the considerable effort in editing/uploading. It was great to be able to watch the video as I wasn’t able to participate live.

Very interesting to listen to future thoughts and developments and the obvious passion and enthusiasm for the Seven from the guys at Caterham.

Don't know and not sure I need to know what went on in the past between the club and Caterham - let’s look forward. There must be a way of respecting the heritage and also recognising  the fact that the majority of members now drive a Caterham.

Looking forward to meeting fellow enthusiasts in Kent and East Sussex as restrictions allow and plan to attend the open day in Crawley.

Welcome to the club