has anyone else had this weird hydraulic clutch issue?

Something very similar happened to me (R400D) when touring in France in 2015.  I lost all clutch action, and even pumping the pedal had no effect.  The problem was down to a failed m/c seal.  I replaced the m/c with a new one, and then refurbed the old one with a Girling kit to keep as a spare.  No problems since.

I would suggest you start by replacing your m/c with a brand-new item.  If that doesn't fix it, suspect the slave (although these are usually bomb-proof).

The genuine Girling cylinders are normally excellent - are all the ones above genuine or copy versions...? have they all got a functioning bleed hole in the cap too..?

Thanks all - had two hour-long journeys in the car yesterday with no problems at all, so it does seem it takes a long motorway run to trigger. Fluid is looking increasingly dirty though. No drop in the fluid level.

Have checked the breather, no problem there. Both the master cylinders are the Caterham-fitted originals like this, the first one to fail was the car's original 20,000 miler, the one in now is a known good 5000 mile one from a car that was uprated at Premier Power that I got in a job lot of parts leftover from the upgrades. Wouldn't usually have fitted a second hand part but as I say I was stuck up in Wales and happened to have it.

I think the next step is to strip and inspect the one that came out and if the bore is good I'll kit it. I agree that sticking a new master on it makes sense, but having just dropped nearly £500 on a service and clutch diagnosis at S&C and with a suspicion that something is causing the cylinders to fail, I'm going to hold off spending another £80-100 right now. I'm not earning at the mo cause I'm looking after my folks.

The only other odd thing was that when I changed the first cylinder the fluid that came out was red (as well as being filthy) which I've not seen before - I know you can buy red fluid but I don't know if it is a different formulation - could mixing fluids have caused an issue with the seals maybe?

Online
Last seen: 2 min 38 sec ago
Joined: 17/04/2014
"The only other odd thing was that when I changed the first cylinder the fluid that came out was red (as well as being filthy) which I've not seen before - I know you can buy red fluid but I don't know if it is a different formulation - could mixing fluids have caused an issue with the seals maybe?"
Bright red, not just dirty brownish orange?
It could have been some sort of transmission fluid. That is reported to damage seals in braking systems.
Jonathan
Top
5th Apr 2021 - 12:14
#16
Geoff Brown

Has the slave in the bell housing been considered as the culprit as that is where the maximum heat absorption will occur ?

May be a rogue slave. Red fluid indicates to me that ATF was inappropriately used.

hmm. It was bright red, just like ATF. I wondered if ATF had been used, but I am assuming that S&C will have disturbed and re-bled the clutch hydraulics when they did the flywheel swap and gearbox rebuild, and that would seem to be an unlikely error for someone with their reputation. Prior to that I had no issues with the clutch for 5000 miles after buying the car with 12k on the clock.

Had been discounting the slave as I figured I'd be losing fluid into the bell housing if the issue was at that end, which Tim at S&C concurred with. Plus of course I'm trying to avoid taking the engine out if I can help it! 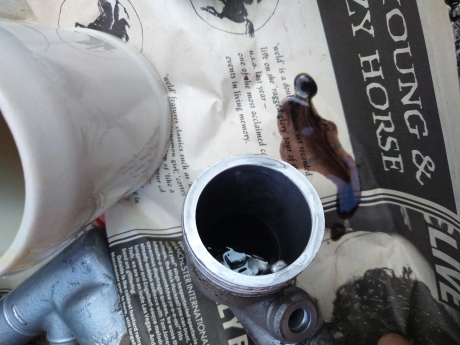 You can see the red colour in the fluid above, it's not that rusty orange that old fluid goes, sadly don't have a pic of the cleaner fluid that came out of the reservoir that was more clearly red with less black goo in it.

AFAIK, red clutch fluid is used in some racing bikes.

Re #12, my loss of clutch action was due to a faulty valve seal: 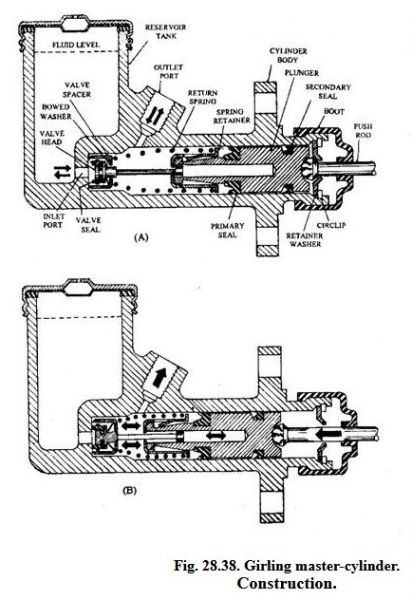 This caused the fluid to leak back into the reservoir when I pressed the pedal.  The primary seal on the plunger was working OK.

This is interesting as the foot valve design is tried and tested and been around since Adam was a lad.... makes you wonder if theres been a manufacturing change or new component supplier.....

you could always try a different brand Tilton offer one with remote or mounted reservoir, as do AP, Willwood, Alcon etc

Are you running clutch stops...?