I have a couple of questions (newbie here, so apologies in advance).

I decided to buy an aero-screen, as my intended usage will predominantly be sprints, hill climbs and track days.

It arrived yesterday (out of the box it is, without a doubt, the most badly fitting factory backed component I have ever had the misfortune to endlessly fettle to achieve a reasonably acceptable fit, but that's another story).

My questions are specifically with regard to scrutineering.

Firstly, the battery kill switch shroud will now not fit around the new screen without some grinding, cutting and modifying .Was the shroud purely for IVA purposes and as such, will I be OK just having the shroud-less key protruding from the outside of the tub? Like this. 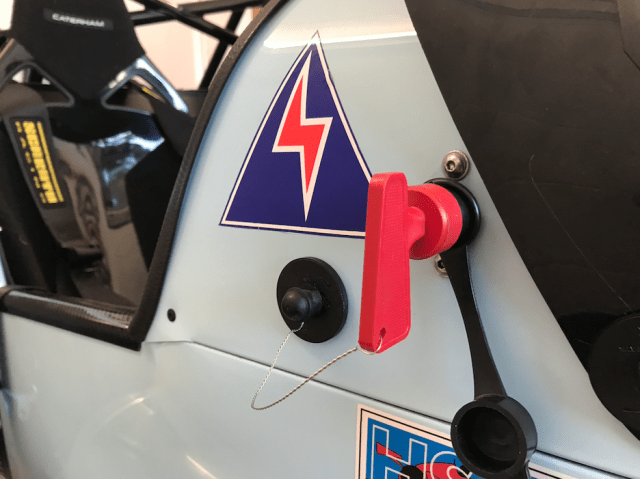 Secondly, I have not yet refitted the fuse box cover and either of the knee panels. Will I be OK to leave these off or is it a no no. Would just seem to leave easy quick under dash access if they were left off?

Your thoughts please. Thanks in advance.

I never refitted the knee panels, there're sharper bits under there that I'm much more likely to make contact with in my opinion.  In fairness though once you've fitted the captive nuts for the aeroscreen/windscreen there's no reason not to put them back.  I'd fit them with screws instead of rivets though for easier access.

The fuse box cover on mine is just a plastic box on some velcro tape, is yours more elaborate?

I'd look at the blue book for advice on the kill switch shroud/eyebrow.

In fairness though once you've fitted the captive nuts for the aeroscreen/windscreen there's no reason not to put them back.

I suppose not, although I always thought they were a bit pointless, especially in a track car, as it doesn't have to look pretty. I did actually use screws when I built it, as I was considering changing to aeroscreen after I had done a few road miles to run it in.

The fuse box cover on mine is just a plastic box on some velcro tape, is yours more elaborate?

Elaborate it is not. It is however quite a lumpen metal device, with a (redundant) integrated 12v socket. It is held in suspension from the top only, by being deformed to wedge against the bulkhead and dash, together with will power and some added velcro for the ultimate in security. As it's well back against the bulkhead and I'm never going to have a passenger, due to petty strut, it just seems spurious bulk, if not required.

I'd look at the blue book for advice on the kill switch shroud/eyebrow.

I can only find reference to the purpose and the required position of the switch.

Thanks for the input. I just want to have all bases covered and not to let myself down on a technicality.

Not sure what the current CC supplied fuse box is now, but consider some tape over the relays for security; mine had a tendency to drop into the passenger footwell after a curb or two...

Never had a cover on my fuse box, but i have run a tiewrap behind and over the top of the relays to ensure they don't fall out, as i've had this happen both on road and events.

The section in the bluebook is section K.8, there is no requirement for a brow.

In your photo your master switch is not in the normal location, hence why the conflict with the screen, it's normally located in the gap in the middle of the windscreen stantion,

I use the plastic fuse box cover held in place with velcro .Its a good place to tape a bag of spare fuses and ive also attached a plastic box ( ex business card container ) to the back to contain a set of spare bulbs .

In your photo your master switch is not in the normal location, hence why the conflict with the screen, it's normally located in the gap in the middle of the windscreen stantion,

It is in the correct place, it was in the middle of the original windscreen stanchion. The problem is that the new screen flares away significantly from the bodywork.

If I don't need the brow, then that's fine. 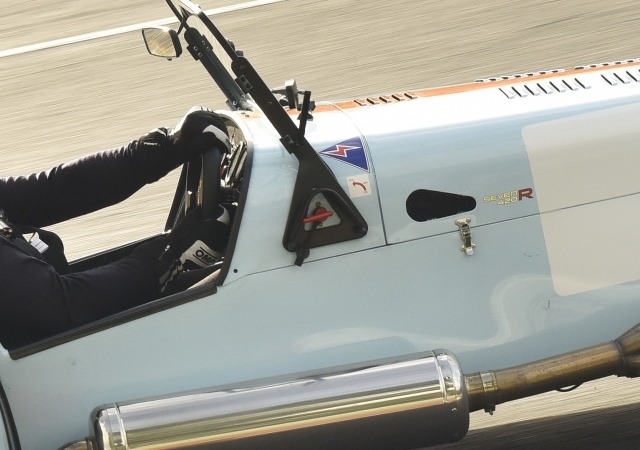 ok Andy, just how it looked.

I don't think there is any need for a cutoff switch for speed events, so no need for the brow.

The only related rules I have seen enforced by scrutineers are:

Curborough: if you have an FIA cutoff switch it must work! (Surprising how many didn't pass the simple test)

Wiscombe: you need an arrow towards the ignition key even if you have an FIA switch. A bit odd, and I was told "what if you crash and the FIA switch is inaccessible. At which point I just continued with the biro diagram on a white sticker solution that others were doing.

Hoping we are back on track soon.

The requirement for the On - Off sticker on the ignition switch is detailed in S10.7.1, so is a mandatory requirement, and always has been even if some scruitineers did not enforce it.

10.7.1. All vehicles must be equipped with an ignition cut-off switch having positive ‘ON/OFF’ positions clearly marked. The
ignition cut-off and fuel pumps isolation system(s) must be operable by the Driver when normally seated with seat belts
secured, with the exception of Standard Cars as defined in 11. where it is recommended.

The Battery Masterswitch is seperate in S10.7.3. An external circuit breaker to K.8 is mandatory for all cars except open cars of periods A – E (Nomenclature and Definitions) and cars licensed for road use (when it is recommended).

for us in Class 1-6 the cars are licenced for road use, so a battery master switch is not mandatory, but the ignition cut off switch Is mandatory, must be marked, and must be reachable from the seated position.

With having so much furlough time on my hands, I decided to modify the brow anyway to fit the new set up. Have also reinstated the knee trims.