Well my 620 has been in Oakmere for a couple of days trying to address the overcooling issue.

It appears they have changed the thermostat for what I can only assume is the preloaded one that CC have suggested.

The result is the running temperature at 3K revs has now moved up from 50C to 60C. The biggest change is that the speed of change of the temperature is much slower. So it takes longer to warm up (not an issue for me). Overall on a 40 mile return journey back of country A roads with periods of high revs and mixed speeds   Some stops at lights the temperature stayed between 65C and 80C.
So, this does not negate the badly designed system and it’s inherent fault of not holding a steady temperature but it will do me for now until the warranty runs out or one of the team come up with a cost effective remedy.

At the moment I would lean towards a PRRT system having good success with them in the past but may be persuaded otherwise when the current tests by others have been completed.

Yes I suspect that's all it is.

Driving 'The Fat One'

I don't see how a stiffer spring would cause it to take longer to warm up .
If the stiffer spring slows the thermostat  opening you would think the reverse is true .

I'm not sure this post is helpful, but it is really interesting to follow as an engineer. I was lucky enough to have the choice between a 420R and a 620R both of which were available within my budget  when I decided to upgrade and trade in my 140 Supersport. Also having met IOM Mark at last years Chippy run.

As far as usability as I don't do track stuff I'm now pleased I choose 420R also following this thread.

For those of you that know me and what happened just after I took delivery, should be happy to know that RBTB are being added during the repair I hope.

Would drilling the thermostat have the effect described? You'd always get some flow through the rad, so it would take longer to warm up, but you'd also then need /much/ more flow to push it open under flow rather than temperature alone.

No need to drill the thermostat as there's a milled cut out in the housing already allowing flow through.

I have to admit i am not familiar with the 620 primary cooling set up but what if the primary circuit would only heat up the oil cooler ? so to connect the metal tube behind the thermostat to the oil cooler and going from there to the cylinder head outlet that way you would have a cooling flow in the engine and a more steady rise and fall in cooling temp when the main circuit opens but then one can't use the ali. thermostat housing with the big hole in it.

Having spent a fortune on hoses and connectors, I might be stuck before getting going.

I kinda worked from memory regarding the space available, a bit of an amateur mistake I know.  Having been into the garage this evening and offered up the PRT housing I have to say, there is surprisingly little room for the additional hoses and PRT stat.  I've spent a small fortune on hoses to give me the greatest potential for success, even so, I think I'm being overly optimistic about getting stuff routed without risk of contact to the intercooler or belts.

The solution Mark W is working on in the other thread is probably the better strategy at this time...   I was so confident about this weekend too.  Kinda gutted my skills are letting me down here. 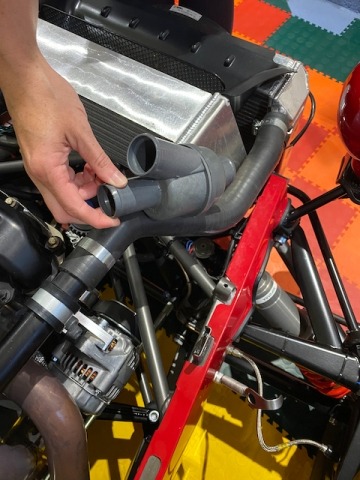 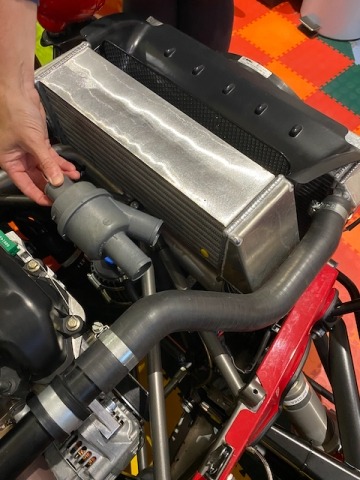 Don't worry Mark, I think our solution is reproducible. Taking it on the track on Monday, Mark now (thanks to you I believe) knows how to get the numbers out, we can compare his and mine.