I've fallen foul of the problem of the alternator not being activated having replaced the ignition/alternator light with an LED version.

Which alternator? And what exciting current does it want?

It's on a Duratec conversion and was supplied ten years ago by Raceline - I think at that time they were using 80A Nippon Denso alternators from Daihatsu Charades or something, but I'm not sure and I don't have specific details.

What I have found is that connecting the original (non-LED) ignition bulb between the NY wire on the alternator and +ve on the battery solves the problem.  Assuming that bulb is 4W, by my calculations a resistance of ~36 Ohms is required ...

Yes that should do fine.

Just wire it in parallel with the LED (and any built-in resistor that uses internally to run the LED off 12V), i.e. between the NY wire and any convenient ignition switched supply (preferably off the same fuse as the LED indicator). It will get warm when in use (i.e. when the warning LED is on) so one of those that will screw to the bulkhead as a heatsink is a good idea.

Just one thought - I'm not sure what voltage this will pull the alternator terminal up to, it depends on the design of the alternator. It might make the LED rather dimmer than before, as the voltage across the LED will fall as the voltage at the alternator terminal is pulled upwards by the resistor. Ideally you would want to drop the value of the series resistor used with the LED to match, but that's probably internal and inaccessible. I've had no problems on my alternators with a 2W bulb, so maybe a 75Ω resistor would be better?

Let us know how you get on.

is the resistor in series or parallel as both terms used?

Excuse the scribbled diagram but I think it makes it clearer: 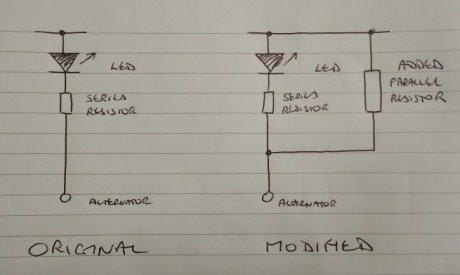 A naked LED will normally require about 2.2V across it. Connect it to a 12V source directly and it will go pop very quickly. So there will be a resistor in series with the LED (probably inside the tacho somewhere where you can't see it) to limit the current.

For example imagine that the alternator terminal pulls right down to 0V so you have battery voltage of approximately 12.6V to drive the LED and you want 20mA of current. 2.2V across the LED leaves 12.6-2.2=10.4V across the resistor. So a resistance of around 10.4/0.02=520Ω would be used.

You can get "12V LEDs" which appear not to need a series resistor - they actually just have the resistor built right into the LED.

You will be adding a relatively low valued resistor as shown, in parallel with the combines series circuit of the LED and its current limiting resistor.

One consequence of this is that the voltage at the alternator terminal will be pulled upwards. How much exactly depends on the circuitry inside the alternator. If we assume for example that it pulls it up to 4V, then we have only 12.6-4=8.6V to drive the original LED circuit. The series resistor will then have 8.6-2.2=6.4V across it and will pass 6.4/520=0.012A, or about 12mA. The LED will therefore only light to about 12/20=60% of its original brightness.

If the LED is unacceptably dim with the parallel resistor, let me know and I'll try to think of something better!

I thought it would be my lack of understanding of the circuitry rather than a typo but always willing to seek clarification / ask the stupid questions.

All good here thank you - I hope the same is true of you?

Many thanks indeed for the confirmation (I was rather hoping you'd be a long at some point ...!).  I took the plunge yesterday and ordered the 40Ω version and it arrived today.  I'll wire it in on Friday and report back ...

I have wired the resistor in parallel with the LED by connecting it to the same NY wire as the LED is connected to and to one of the G wires that feeds the switches.  I've double-checked that I've used the correct wires using a multimeter.

All seems good - ignition light shines brightly with ignition on and there's a healthy 14.4V across the battery with the engine running (at which time the ignition light is out).

The problem comes when I try to turn the engine off.  Usually I press the button that turns the ignition on and off and all is as it should be.  Now, when I turn the ignition off the instruments all die but the engine carries on running.  Hmmmmmm I thought, well I've got a BMS so I might as well use it.  No effect - engine continues to purr merrily away.  I eventually killed it by disconnecting the green wire from the resistor.

I dare say that with a cold towel around my head and a bit of ruthlessly applied logic, I could eventually work out what's going on, but it seems so much easier to ask the clever men of Blatchat who know all there is to be knowed ...  I presume the resistor is preventing a circuit from being broken when the ignition is turned off and that the engine is simply running from the output from the alternator when the battery is disconnected.

I guess I ought to add that it's a 1999 car with the ignition light external to the tachometer, not integrated, and that it has a latching ignition button and a momentary starter button.  The BMS is one of the cheap and cheerful ones with solely two big connections for the battery cables.

Have you changed anything else since it was operating correctly with the original incandescant warning light?

... and to one of the G wires that feeds the switches.

Which wire and is it ignition-switched?

Short term fix, put your headlights on, the engine should stop!

You need a higher value resistor, or probably a better solution would be a diode in line with the resistor you've added.

What is happening is, with the ignition switched off, the alternator is actually feeding enough current back through that resistor to power your ECU and keep the engine running. I'm surprised it happens in the car with a resistor of that value, but that's what's happening! I saw a similar issue on a K Series I have on a test rig. On that I had a couple of 2W indicator bulbs, one for the alternator warning and one just to show me I'd got the ignition switched on. I increased the "on" light to 4W and it was enough to pull the voltage down and kill it.

Give me a few minutes and I'll show you what you need ...