OK, you need something like this, a 1N4001 rectifier diode: 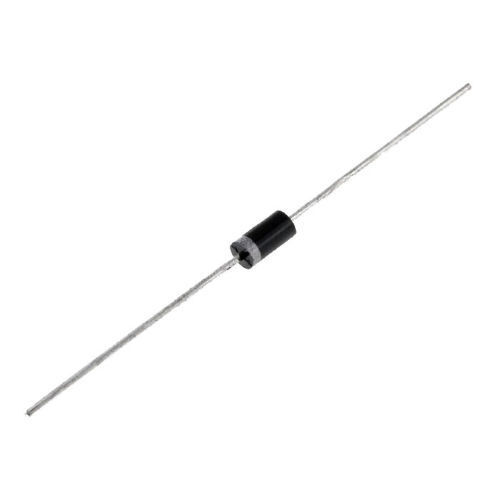 It's a completely standard part, you can get them anywhere, only pennies.

You need to pit it in series with the resistor you've just added. The easiest thing to do is just to crop the leads short, cut one of the wires and solder it in line, then use a bit of heat-shrink tubing around it to protect and insulate it. It doesn't matter which side of the resistor you put it, the important thing is that the end with the silver band around it should be pointing towards the alternator (if you follow the wiring). It will only allow current to pass one way, towards the end with the silver band.

There are two reasons why the original warning light doesn't cause this. 1) It's got a much higher resistor in series. 2) It's an LED. The D stands for ... diode.

PS: There's a similar issue that affects the K Series, and possibly others. If the electric fan is running when you switch off, sometimes the engine runs on in the same way. The inertia in the fan keeps it spinning and the motor becomes a dynamo, powering the ECU up as in this case. Doesn't last long though before the fan runs out of energy.

PPS: It might seem implausible that the engine electrical systems could be "powered" through a 40 ohm resistor. On the K Series, the ECU has a permanent live feed which is not switched. The fuel injectors, ignition coil packs etc. are also either permanently live, or switched by a Master Relay under the control of the ECU, depending on the loom design. There is an ECU "Ignition Sense" input pin which is connected to the ignition switch 12V circuit and tells the ECU when the engine is switched on. The alternator only needs to feed enough current to pull that input up to some threshold voltage and the ECU thinks you're still switched on so keeps running the engine. With very little other electrical load on that side of the ignition switch, it doesn't take much. So being strictly correct, the alternator or fan isn't actually powering the ECU, more signaling to it that it is still powered. That's why I said the lights would kill it; anything that would load it up and pull the voltage back down beyond the capability of the alternator fed through that resistor would shut it down.

Andrew, that's superb - many thanks indeed - all installed and normal service has been resumed ...

There were four diodes in the box with a second-hand ECU I bought recently (I wondered what they were ...!) and one of those has done the job.

And boy am I glad I took the trouble to put rivnuts rather than rivets around the scuttle - I am no longer the contortionist I never was!

And thanks for the detailed explanations of what's going on - like so many things, it all makes perfect sense when somebody who fully understands these things explains them - all interesting and informative stuff ...

Top
27th Apr 2018 - 18:30
#16
revilla
Online
Last seen: 11 min 52 sec ago
Joined: 17/04/2014
Glad it's all sorted. You still get decent brightness from the original LED? There have been a few cases recently but I've never had feedback on the final solution and how it worked out. Nice to have a confirmed fix documented.

Yes, the original LED appears unchanged in brightness - if it is dimmer, it's only marginal and still perfectly functional, but I think it's unaffected.  Agreed about documenting a fix - and a fix it certainly is ...

I should be able to work it out (or I could just experiment), but, out of interest, will the diode stop the radiator fan keeping the engine running for those extra few seconds?  I found it slightly disconcerting the first time it happened, but it's never bothered me since.

No the diode you have just fitted will only affect the alternator issue. You could put a diode in the fan circuit but it would need to be something rather more substantial than the 1N4001 I linked to above, which is only rated at 1 amp.

What still puzzles me is why there seem to be quite a few cases of this particular problem cropping up lately, when you would think if it had always been a problem it would have been discussed extensively and a fix found long ago?

One possibility springs to mind, but I've no idea if there's any truth in it. It seems odd that Caterham would have only fed the alternator from an LED. I just wonder if there is actually a resistor some other circuitry hidden inside the tachometer in parallel with the LED, but this is underrated and over time burns out. Just a thought. If anyone would like to measure the current fed to the alternator on their K Series car and report back it would be interesting. I measured mine a while ago, I can't remember exactly what it was now but it was something silly small like 4 milliamps, so if this is a fault my car clearly has it - I seem to be lucky enough have an alternator that will reliably start on that!

@Jonathan Kay, do we know anyone who has a K Series car, likes a bit of research and data and is handy with a multimeter? All we need is an ammeter between the brown/yellow wire and the alternator terminal with the ignition on but the engine not running. No problem if you need to remove a 2-pin plug to measure it, the DFM on the other pin won't affect things.

...do we know anyone who has a K Series car, likes a bit of research and data and is handy with a multimeter?

ETA:  I assume the subject car will need to be one with an LED warning lamp built into the tacho?  If so, my S-in-L won't be able to help as his car (1999) has the old-style tacho and a separate alternator warning light (presumably an incandescent bulb).

Andrew: Great idea, but today I am mostly sealing the garage floor. And after that comes the giant buzz wire game for this summer's wedding!

Yes it's really the current that the standard tachometer warning LED and any associated resistors normally feed the alternator with that I'm after. But thanks anyway.

Nice try but don't worry, if you haven't actually got a multimeter you can admit it... we're here to help :)