I can't thank Jonathan Kay enough for his help in diagnosing the problem. As BC was ‘down’ this morning we communicated via email, but I have posted Jonathan's and my conversation below for future reference - in the hope that this may of help in future to people who, like me, are complete numpties when it comes to electrics!

Jonathan advised using a multimeter to test the brake light switch. I was gifted a multimeter some time ago but (shamefully) I didn’t even know how to work it!  Before you all laugh, I’m ok mechanically… I’ve taken engines, gearboxes, suspension, diffs and all manner of things apart and rebuilt them, I even built a Land Rover Defender 90 from scratch - every single nut and bolt -  20 years ago. But when it comes to electrics, I’m completely lost, it’s always been a black art to me.

My email provider has somehow lost Jonathan’s first email, but he told me to turn the multimeter to any setting that measured voltage, put the red probe on the positive battery terminal and the black one on the negative and see if it read anything like 12v-13v. It did.

Then to do the same at the brake light switch (jam a probe into each side terminal and see what it read).

I’ve done as you said and used the multimeter. On the battery it read 12.85 and at the brake light switch with the probes jammed into the terminals it reads 12.34v - very slightly lower than the reading at the battery. 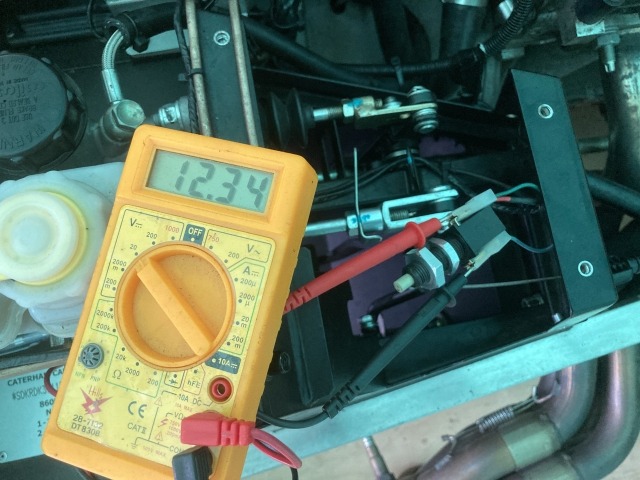 I’ve taken the bulbs out and they look fine.

I cleaned up the Earth on the inside of each light cluster but they weren’t bad, I only did so because I hear 99% of all problems are earth related.

OK… the multimeter is working and you’ve got the right range.

Put the black probe on the battery negative terminal and keep it there.

Then the red probe on one side of the switch: what voltage does it show?

Then the red probe on the other side of the switch: what voltage does it show?

And what colours are the wires on each side of the switch?

The ignition needs to be ON for this test.

Okay, with the ignition on and doing as you’ve described the multi meter reads 12.22 when the probe is on the side with the 2 wires (red wire +  plain green wire)

It reads nothing at all with the probe on the side with the single green wire with purple stripe. 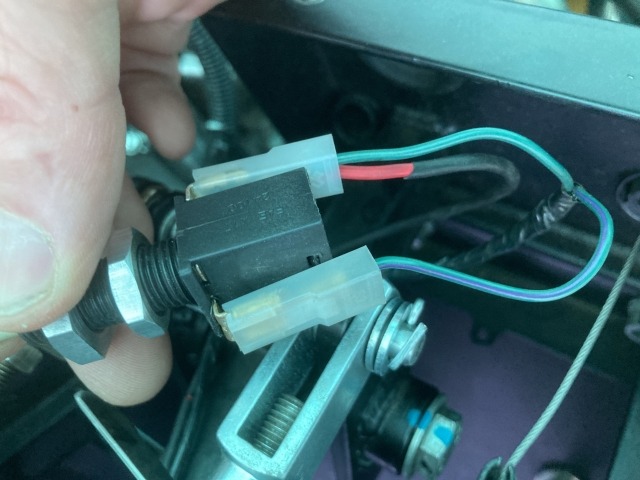 You now know the input and output side of the switch and that it has a live feed at the input side.

Green is the ignition-switched feed, and Green/ Purple goes from the switch to the lights. I don’t know what the red wire is.

With the ignition ON:

Leave the black probe on the battery negative.

Put the red probe on the OUTPUT side of the switch.

Press the switch fully in by hand.

What happens to the voltage at the OUTPUT side of the switch?

And while you’re doing that see if the brake lights are coming on when you press the switch fully in by hand.

Jonathan, you really are teaching a man how to fish rather than giving him a fish. This is hugely appreciated!

So, doing what you say, with the red probe on the output side of the switch and the black probe on the battery negative terminal, when depressing the plunger on the brake switch nothing at all happens to the voltage - it just says 0.00.

Also, when pressing the switch nothing happens at the lights.

Sounds as if the switch is bust.

To confirm that now switch the multimeter to a resistance range, one in the section with an Ω.

Touch the two probes together and it will show the low resistance and continuity. Then do the same on any piece of bare metal so that you’re familiar with the response.

Disconnect all the wires from the switch

Now put one probe on one of the switch terminals and one on the other.

On a working switch there’ll be no continuity until you press the switch in and then there will be… what happens on yours?

So when I do that the multimeter shows the number 1 when the probes aren’t connected to anything.

When I touch the ends of the probes together the numbers change rapidly and then settle to 001.  Is that correct? 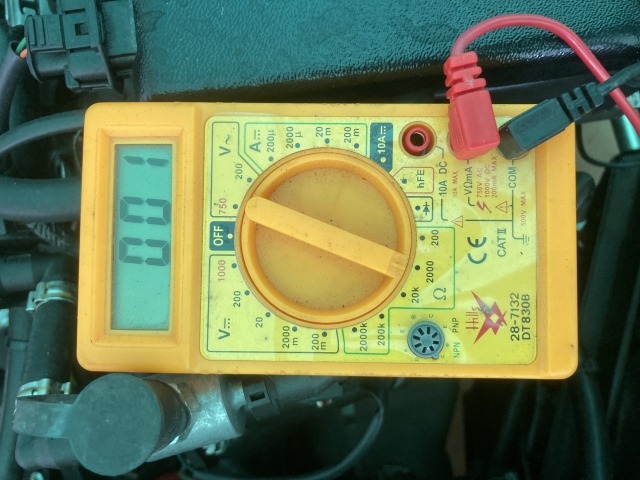 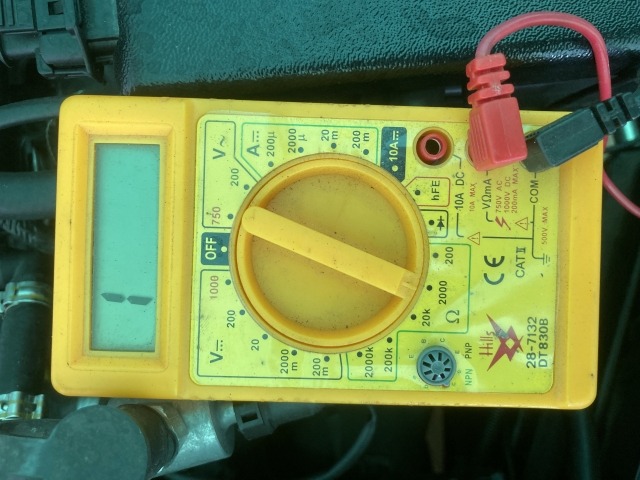 It’s common for these switches to fail.

A better model is available:

But it might be mendable. You can take them apart and have a look, but BEWARE… there is a little spring that makes a bid for freedom when you open the switch, so this needs to be done deep in a box. Same thread as above:

Online
Last seen: 10 min ago
Joined: 17/04/2014
Fixing the CC brake light switch is a 5 minute job. The spring isnt that ferocious at all, just prise end cap out gently and keep your hand over to restrain the small spring. You'll find a u-shaped contact inside ... the legs just need squeezing together a little. Clean any greasy gunk off them.
Top
10th Sep 2021 - 14:22
#25
OldAndrewE

"I’ve taken the bulbs out and they look fine"  Obviously not the issue in this case as the fault has been found but a broken bulb is not always obvious to the eye if the filament has broken due to a knock or similar.  Better to check by connecting to a known good supply, e.g. the battery

Note that the switch turns OFF when the plunger is pressed in (its rest position).  When you apply the brakes, the tab on the piston rod moves rearwards, releasing the plunger and turning the switch ON.

Now that the switch looks to be prime suspect, what happens when you short the wires on each side of the switch together (with ignition on)?

Thanks for that, John. I didn't have one in front of me, obviously.

Shorting around the switch would be a very smart move.

Fixing the CC brake light switch is a 5 minute job. The spring isnt that ferocious at all, just prise end cap out gently and keep your hand over to restrain the small spring. You'll find a u-shaped contact inside ... the legs just need squeezing together a little. Clean any greasy gunk off them.

I'd already tried that but to no avail...

Now that the switch looks to be prime suspect, what happens when you short the wires on each side of the switch together (with ignition on)?

Do you mean like using a test light (as in the type that is a small screwdriver type thing with a probe, and a wire at the other end with a crocodile clip?) 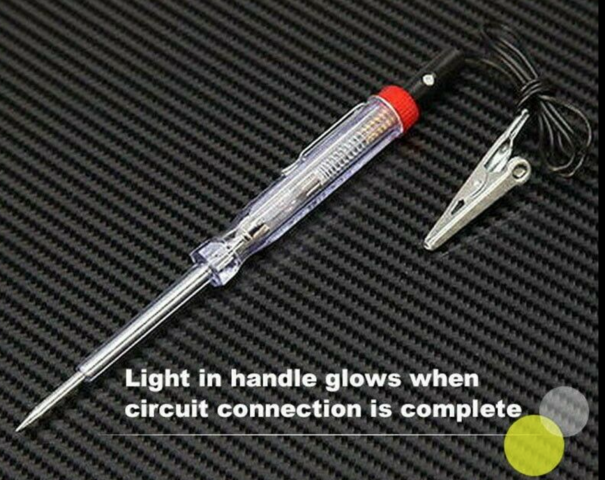 If so, I tried that before and no dice...  the test light lights up when the two terminals/wires going to the brake switch get connected, but teh brake lights didnt come on...

No. A direct connection (short) between the input and output wires at the switch. That makes the switch irrelevant. And (with the ignition ON) the brake lights should come on. And if they don't there's a fault somewhere else.

Edited, crossed post with SM25T's.
You can connect across the switch terminals if both wires are still connected to them. Otherwise connect between the wires.