In another new thread they are touting for business (via 21jigsaw) to make throttle bodies at £1075 a pair. Doesn't make sense as they have multiple moving parts and there are two of them. Your suspension part is one piece no moving parts. Also, they seem happy to do some business direct but other items MUST go through Caterham.

As it is their component which has failed you'd think they would be looking to replace as a good will gesture.

All leaves a bit of a bad taste!!

I wonder if the dampers had rose joints would it put less strain on the damper support ?

OK, the final bolt on the 'good' side is not coming out without MIG welding a nut to it, so I'm giving up on that for now. 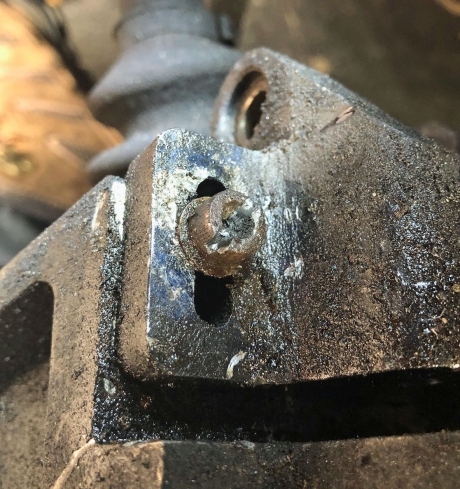 Cut a neat little slot and put in my impact driver bit. Can't keep it in using a socket wrench or t-bar. However, it is in well enough that it doesn't slip with my Makita 18v impact driver (so that's some significant force - especially when assistant was tugging on mole grips and trying to move the clevis relative to the upright at the same time!). It's been soaked in repeated doses of plus-gas for 4 days and I've heated the aluminum upright with a plumbers blow torch, so heat and penetrating oil are not doing it. 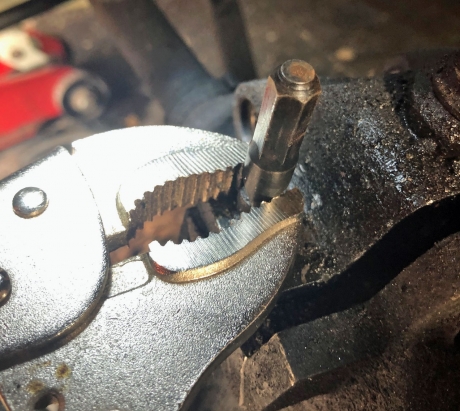 Given it won't come out and is therefore still re-assemble-able (is that a word?), I'm giving up on that for now. I can't afford to damage a second one, now I know that they're £675 each! Once I get the other side fixed, I'll take it to a professional to have the allen bolt removed and a new one put in.

My new Plan A is to try to talk Caterham/Titan into robbing me the £675, but doing it NOW rather than in 2 months. CC told me that they are still making between 12-20 CSR-485s for the European market a year - therefore they must have the parts in production stock, even if they don't have them in spares stock... I can't believe that Titan make a new damper clevis each time CC get an order for a new car from Switzerland! My reasoning for not trying to get a replacement part made (apart from I can't get the good one off) is I'm now getting all anxious about it being made wrong. There is no way that the big pin that goes through the wishbone is coming out without destroying the existing part. Getting the dimensions exact is clearly important for suspension geometry and I'm sure Titan don't just get them anodised because it looks pretty ...

Good luck, an unenviable position you're in.  Stuck between CC and Titan, and all you want to do is get your car fixed.  I hope you can get it sorted soon.

Ian - I did say that to CC yesterday, but they cautioned me (& you couldn't make this up), the last person to order a whole (not in stock, subject to long lead time) race upright at £1,300 did so 2 years ago and it's still on the CC system on back-order!!!

When I asked how that could be, they said, "the person that ordered it hasn't chased us up, so we haven't chased up Titan. I suspect that they had one made instead" ...

Pretty simple part.  Not that much to get wrong - most designers do tend to work to sensible dimensions, so its usually pretty easy to see their intent when you start measuring.

Anodising would be for increased corrosion resistance - form a thicker oxide layer than naturally occurs, and make it look pretty for those who care.  I've done it for show machines or to add perceived value so finance and managers think its a premium part :)  And then knock it off the drawing for production items.

Draw me a picture of it, slap some measurements on it so I can model it, and I'll see what I can get one made for.  If it comes out sensibly priced, we can finesse the dimensions to actual values - if you get that other one off, I might even be able to slide it into one of the CMM and get some ridiculously over the top measurements :)

I would imagine that the failed one will be sufficient for first-pass (or even more accurate scanning/digitising) purposes?

Bricol - I've had a go at drawing it. Clearly, to make it it would need some more dimensions (e.g. the profiles of the curves and the actually details of the holes through the damper mounting parts, which are a bit more complex than a 13mm hole), but there's probably enough here to get a price ... 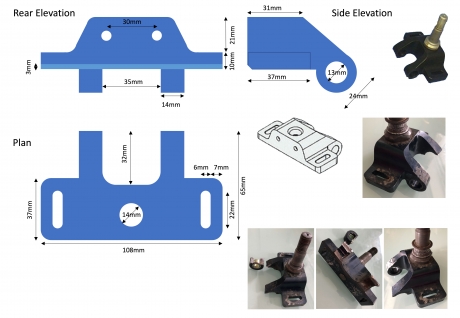