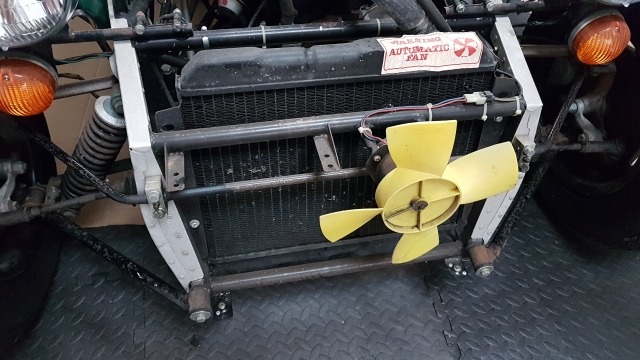 I used to own a 1985 Super Sprint which I had from new and kept for 25 years. The cooling in traffic was always marginal and I believe that the original radiator was from a Hillman Hunter. I retro fitted a Cosworth radiator which was bigger all round and had to be moved to the front of the chassis, with added mounting brackets welded on. The fan had to be turned round as well. It then cooled the car well. 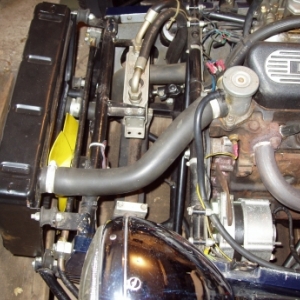 I "think" I still have the original Hillman Hunter radiator in the garage.  I can't remember ever throwing it away.

This is a slightly better photo. I also had to move the oil cooler and bracket. 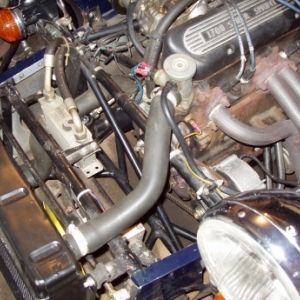 Thanks Piers, that's effectively a de-dion set up, and is known to work, I've got the same on my later car. I was wondering if anyone had ever managed to implement a solution that didn't require re-positioning the radiator, if I have to i will.  It's good to know where a radiator is too, mine's not been started for decades so who knows what's the state of the existing radiator , lol.

Alan  This car in photo was a live Axle.

Piers,  sorry I meant the layout of your solution follows the radiator set up which was implemented when the later de-dion chassis were introduced with the cruciform set up at the front.

The car will be going to Arch at sometime, as I don't like the lapbelts currently fitted I much prefer a full harness, so the chassis will need to be modified to accommodate them,  altering the rad pick up points could be done then.  It's what to do in the interim, if anything.

Alan, your radiator/fan setup is in the same position as mine.  The fan is not automatic, there's a switch on the dash for that.  Overheating is never really an issue (other than in the cockpit!

) and if the engine does get a bit too warm in traffic, then a few dribbles on the road is the result

Non of this unnecessary weight with expansion tanks!

Your picture did bring back memories though of a French agricultural garage doing some delicate welding to the broken top stay on the radiator, in the middle of nowhere, on a Saturday afternoon!  Job done, payment refused and on our way again touring rural France.  His work is still pretty solid today!

Then there was the blown headlight on a Le Mans trip...

... and the failed generator/regulator on another Le Mans trip...

I could write a book

Even Sir Derek could win it!

I'm yet to put a working battery on it to check the electrics, so that's another journey into the unknown.......then the engine.....then the rear axle...lol

On my 1987 Supersprint I removed the old fan and installed a modern fan on the front of the radiator. I also installed a manual switch on the dashboard. The relay actuation works perfectly and the car never overheated after I made the upgrade, so the manual switch really isn't needed. I occasionally use the manual switch when autocrossing which puts high loads on the engine for a short period followed by longer periods sitting still.

Old fart pretending that age is just a number

Further to my post on the other version of this thread just now I can confirm that my fan is automatic via a thermostatic switch in the thermostat housing plus I seem to recall there is also a manual override switch on the dash (all part of the wiring as supplied by CC).  It is in bits at the moment so cannot confirm

Roy. I think we did the 1988 trip to Le Mans and stayed at the Chateau with Madame Condom. Was this one of your trips ?