I have managed to splice in the serial connector and hook my ECU up via a USB-Serial lead and Win 10 32bit running on Parallels.

I have Easimap 5.5 running and it sees the ECU (intermittently) and the data gets plotted but with occasional spikes.  This is running the 967bc54f.ec2 file so I was hoping someone might know where I can source the correct ec2 file for my 967bc474 ECU.

My hope is this might fix the connectivity issue, then I can work out what is going on between 3k-4k.

At the moment my data looks like this so hard to decipher!

I doubt you'll have steady communication with anything higher than WinXP - or at least: I've not managed to.

I've successfully used a laptop running Win7pro 32bit with Easimap5.5 to a 967.

However, I only found success once I'd found a USB to RS232 adaptor that worked.....

If there is a bit of communication instability, it won't be a problem if you are just using Easimap for monitoring. If you are going to use Easimap to update the ECU or write a new map, comms or operating system instability can be a big problem.

With my 9A4 ECU, I had Windows crash on me during a map write, it corrupted the comms code block in the ECU and effectively bricked it, I had to send it back to SBD to be bench re-flashed. For me this was quite expensive, as overnight shipping to the UK and back from Canada plus the SBD hour of labour charge cost me almost $500 (£300}.

I've not even with a laptop with native RS232 been able to establish stable connection (!) on anything later than XP

So with the correct config (thank you Richard) and some tweaking of the serial parameters I managed to get some stability.

If you can look through the spikes you can see that the Ignition Advance and TPS vs Speed of Ignition seem to change quite dramatically during the rev range where I feel down on power and misfires (3-4k).  This has perhaps been made worse running Super Unleaded (increase in backfire).  This plot is from just running the car in neutral and this is normally 100% repeatable..

I haven't looked in to mapping yet (I might need the unlock code) but does anyone have any insight on where to start investigation a fix for this?  Does it look like a mapping issue?  I can't really see how this is mechanical but I am open to all ideas. 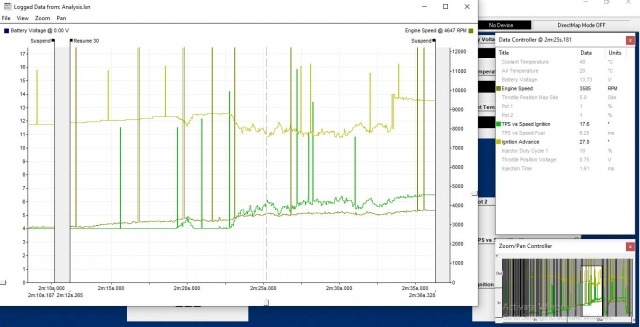 As far as I can see from the traces, you have electrical noise in all plots that lasts for a fraction of a second - every second or so, but not even and perhaps tens of milliseconds in duration, but hard to tell from the scale shown.

I would say a bad earth, fractured wire or some form of electrical interference could be the cause, but these massive short duration spikes are not normal and are likely to be a contributor to poor running, if not the cause.

If the spikes are only in the 3000-4000RPM range and not evident elsewhere, then that may point to a resonance that could cause a fractured wire or worn connector to make and break connection, or perhaps an alternator issue that is rev dependent. A cheap USB oscilloscope attached to your Macbook may be a good way to track down electrical issues, something basic could be purchased for £50 or so. I would start at the alternator and look at the cleanliness of the power output, then probe inputs into the ECU to look at the signal there. There is also a possibility that the internal voltage regulation in the ECU is failing and causing the spikes, as you have them on multiple independent channels.

On my R400D I had a poor connection on number 1 cylinder coil pack that caused sporadic rough running at certain RPM, this was caused by resonant vibration and was diagnosed with an oscilloscope.

Thank you for your feedback James.  If it's not obvious this is the first time I've come close to engine mapping or diagnostics on this level so I am in full learning mode.

I did wonder if the spikes were the root cause but when I looked in to the data the values all appeared to be null so I had put this down to the serial connector instability.  The ECU is earthed to the battery and it looked firm.  I will hunt down the rest of the earth points and give them a check and order an oscilloscope for my rapidly expanding toolkit.

In general I think the car runs fine.  It's just this specific rev range (between 3000-4000) where there is what I would describe as a 'dead spot'.  The car doesn't pull well during this range, backfires frequently if held in this range and I can hear (from the induction barrels) what sounds like detonation.

This dead spot is very obvious in gears 1 through 4 but becomes less noticeable in 5th and 6th.  Once I am through the 4k barrier the car pulls like a train.

When I look at my graph I find it odd that the ignition advance 'plummets' during the rpm range where I have problems and then jumps back up to what looks like the correct place when we hit ~4k RPM.  I would personally expect that graph to continue it's trend through that phase.  This trace was taken from me slowly going up the rev range from idle and through the problematic range.

Discussion of oscilloscopes from 2019, with recommendations.

Thank you Jonathan.  I ordered a little pico box last night and it should be here in a few days.

In further mapping updates.  I managed to get through the pin code and download the firmware and map.

Does anyone know the RPM increment or how to get it displayed rather than the max value?

I have to say, those 0 values puzzle me at site 9 & 10 but they don't seem to correlate to the ~5.0 site where the problem lies if the Throttle Position Map Site is using the same categorisation. 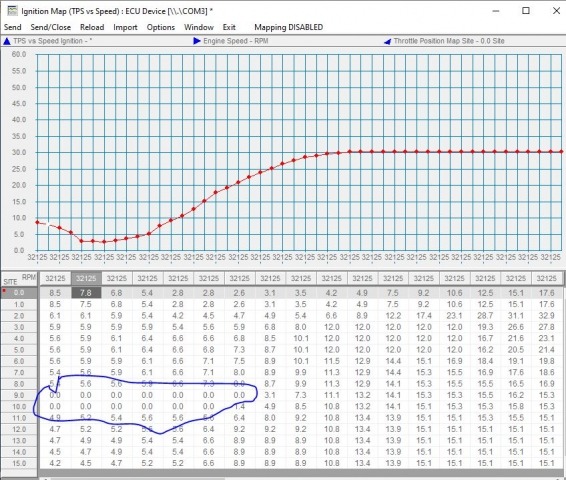