Hi.  I would like to sense check what I'm thinking of doing at the rear of my late 1996 De-Dion car.

To cut a long story short I wanted to replace the dampers and springs on all four corners.  All were OE from 1996, so non-adjustable Bilsteins.  As they are 23 years old, it seemed the most sensible option.  I was tempted to keep the car OE, so new Bilsteins with adjustable platforms.  In the end I decided to treat me and the car to Nitron NTR R1 1 way adjustables.  I exchanged e mails with Simon and received some very useful advice at the same time.  I took Simon's advice on the spring selection for road use (200 ib/in front and 130 ib/in rear, but decided eventually that I would obtain the set direct from Nitron, I will come back to that point though.

When I specified the kit (Narrow Track De-Dion), I looked at the car first and as the rear mount for the damper on the de-dion tube seemed to be in the centre, I asked for that option.  Bassically there were two options, lower mount or mid tube.  Of course, that was incorrect!  The lower mount of the rear dampers is welded to the underside of the de-dion tube.  About 30mm above it is where the dampers used to be mounted, up to, I think  early 1996.  So on my car, in the event, I have the later de-dion tube, with the wider triangular gusset and mount for the A frame.  This has two possible mounting positions for the rear dampers.

As a result, I have ordered, and been provided with, dampers that fit the top to centre mount dimension.  Dampers were mounted in this way on the early de-dion cars, then the lower mount was moved, I think to allow Bilstein dampers with increased gas capacity, in 1996.

Going back to Nitron NTR RI dampers.  It seems to me that the only difference between those specified for the centre mount, and the lower mount, is the length of the lower mounting eye.  The damper body, and therefore the piston travel, is the same.  There is only 30mm difference in overall length between the dampers specified for the two positions.  See photographs: 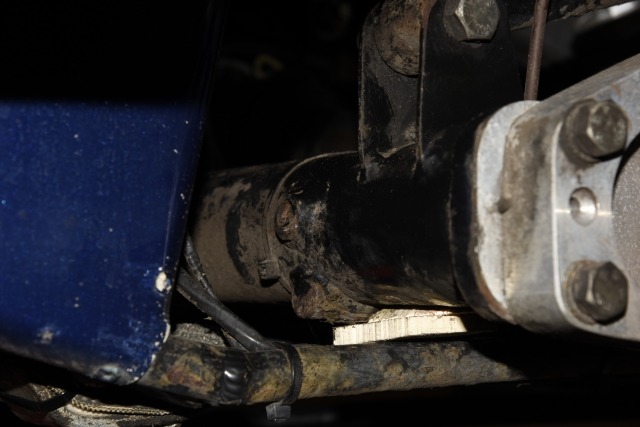 The above photograph shows the unused centre mount and the currently used lower mount, viewed from the rear of the car. 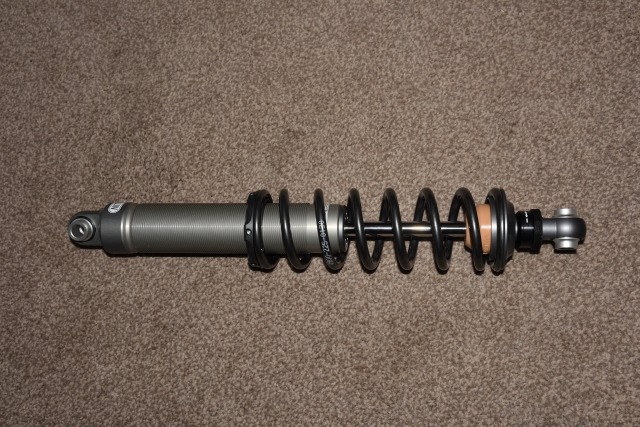 The above photograph shows the Nitron damper specified for middle mount fitting.  The lower mount, just below the adjuster ring, is shorter that the mount for the lower position would be.  Nitrons mount 'upside down' depending on how you define that! 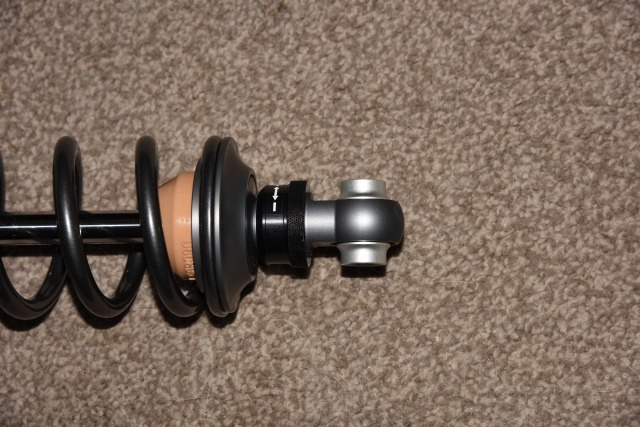 The above photograph shows the lower mount in close up.

I now have a dilemma, of sorts.  I have fitted the front dampers with no apparent issues.  It seems as though, once I have obtained the correct 1/2" UNF x 5" tensile bolts, I can fit the above Nitron dampers and springs to the centre mount in the de-dion tube.  Alternatively I could ask Nitron to change the lower mounts for the longer ones and then continue to use the lower mounting position.

I am though attracted to the centre mount option.  There will be no change, I don't think, in suspension travel, and the centre mount seems potentially stronger, given that over the years there have been some failures of de-dion tubes and damper mounts.  The drawback might be, though, that if the de-dion tube ever needed changing, the newer tubes do not have the centre mounting hole, and a wider triangular gusset.  I dare say that Arch Motors could help with that though, if needed.

What I am after, if possible, is reassurance that I haven't missed something obvious?!

I said above that I would return to how I obtained the Nitron damper set.  I did ask Simon (Rogers) for advice, and I'm certain that Simon would know the answer but as I didn't obtain the kit from him I haven't asked directly.  My thinking there is that when I have had chance to use the car with the new dampers and springs, there will at some point be a need for either overhaul of the dampers of maybe modification.  If that eventuates I will no doubt be asking Simon.

Update to my request above.

I managed to obtain some 1/2'' UNF x 5" high tensile bolts together with locking nuts and washers and used these to attach the bottom of the dampers to the centre of the de-dion tube through the mounting tube that was used prior to 1996.

I discussed with Nitron, they confirmed that the difference in length between dampers specified for the central or lower mounts, which I think is around 30-40mm is achieved by the difference in mounting .  The damper body is the same length for both versions.  I am happy to be using the central mount as to my eyes it would appear to be stronger.  I don't think that the later de dion tubes have two mount positions?

I completed the installation work by setting the ride height with a 15mm rake, higher at the rear and with the front wishbones near to parallel with a flat (or nearly flat!) garage floor.  I now plan to have the suspension geometry checked as part of a flat floor type set up, once the car as been driven a bit to bed in the new components.  See photograph 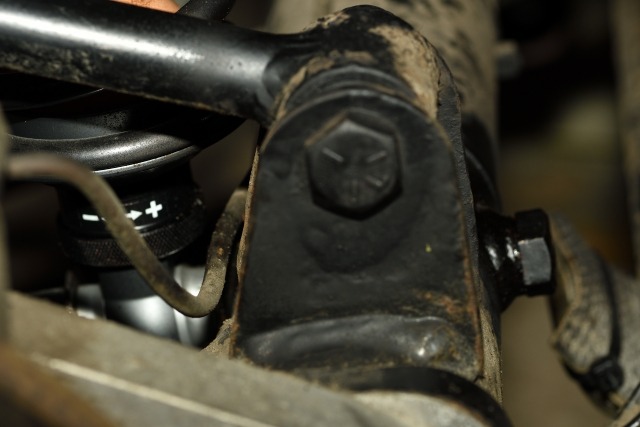 #3 Gary May & Caterham data doesn't say to set the rake with ballast. BTW  how much weight difference is there on the front axle with or without driver ?

thanks for the thoughts.  I tried it with ballast as you would if you were doing a flat floor set up.  Not that I have ever had one, but plan to before long.

Ballast applies to all geometry checks, our cars are even more sensitive than tin tops due to the high percentage increase the driver / sat nav adds.

If you set the car up empty you are wasting your time.

Top
10th Oct 2020 - 18:01
#7
nickh7
Offline
Last seen: 1 hour 7 min ago
Joined: 17/04/2014
I went Nitrons but following Discussion with Nitron , Simon and Dave Gemzoe I went with Simon's valving it makes a difference on the bumpy roads the control linked to his suggested spring Rates has improved handling no end I have the same set up early97 k but Widetrack. I have gone lower mounts based on Dave Gemzoes advice . I did have both front and rear dampers lengthened by Nitron through Simon to allow for 80mm sump clearance and 15mm rake with me in it . The set up was then done by Dave and the car is sublime.

Nick, interesting.  Happy with mine so far but will keep trying to improve it as you do.  My sump clearance is nearer 90mm but I'm on 185/70 x 13 tyres.  This is needed in Herefordshire where the road surfaces have been allowed to become awful.  'A' roads have potholes that you would have expected on 'B' or 'C' roads 20 years ago.  Even worse for cyclists and motorcyclists though.

It would be nice to know more about the effects of the lower damper mounting position on the de-dion and why one position might be better than the other when they are only 30-40 mm apart?

Ive not heard any reason, handling wise, between the below tube and through tube mounts. I've always assumed it was to accommodate different dampers over the years - they haven't always had Bilsteins.  My late 95 dedion always used through the tube which I was rather pleased about when starting to read about the lower mounts unpeeling from the tube.

Baggiebird - I am not qualified to say if there are any handling advantages of either of the two mounting points, however like you and from an engineering point of view the “through the tube” mounting seems a better, stronger option.

Due to a De Dion failure in 2007 I did some research and came across Ian Bruce’s very informative post Summary of Dedion tube failures and it became quite obvious that, although mine wasn’t, the majority of failures were with the under slung damper mounts shearing off. 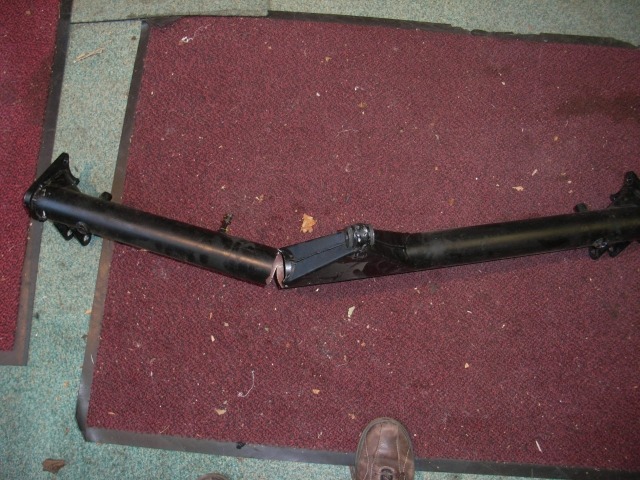 The tubes are still a stock item at Caterham Cars (P/No: 79016) so your choice to stick with the "through the tube" mounting will be fine should you ever need to replace the tube in the future.