Thanks, Roger.  That's exactly what Steve Perks has just suggested.

So, I'm now contemplating removing the box and shipping it off for repair/refurbishment.

Does anyone know how much a 6-sp box weighs?  (I'll need that info for the courier.)

And can anyone recommended a good courier?  (I'm assuming I'd need insurance for around £2K.)

If no one has weights, can't imagine it'll be much different to a five speed box

Not sure where you are only you mentioned using Millwood for service so it might be quicker to pop up the M5 to Redditch in person....

If you ask Steve first he may do it the same day for you or a worst courier it back down for you.

You really need to send them in a wooden crate for piece of mind too.

Neil - West Dorset. Mind you, I think Boris's national bollocking on telly this evening has put the kybosh on any personal journey! Plenty of time to remove the box, though.

I spoke to Phil Stewart at Road & Race Transmissions.  He thought my particular symptoms were unusual as they appeared to be intermittent and affected only 6th to 5th down-changes.  He advised I first of all check the gear lever spherical bearing and the plastic saddle.

I've just done both.  The spherical bearing is as smooth as silk in all directions (this is the Quaife quickshift, I believe).  (ETA: The bearing moves very slightly up and down in its housing -- is that a problem?)

The plastic saddle looks ok but I'm not sure what a worn or damaged one would look like.  Here's mine: 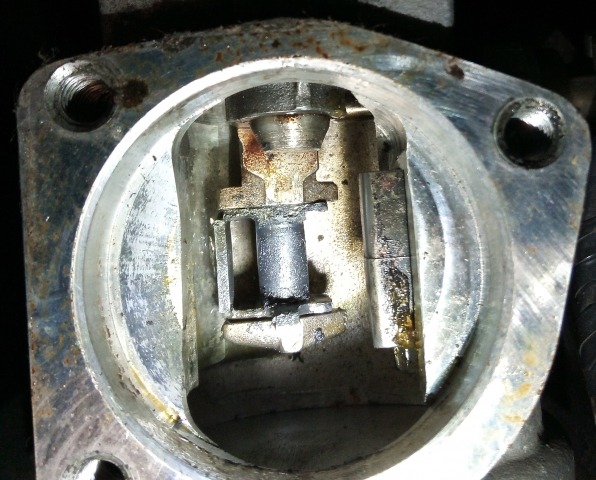 I think I'll replace it anyway, but how do I get it out?  I can reach it with long-nosed pliers but I don't want to damage it, just in case I have to re-use it.

I'd get your new one in hand then it doesn't matter how many pieces it comes out in!

Googling images of the plastic saddle it should come out vertically upwards. Perhaps an allan key underneath and pull upwards to get it started?

I spoke to Phil Stewart at Road & Race Transmissions.  He thought my particular symptoms were unusual as they appeared to be intermittent and affected only 6th to 5th down-changes.  He advised I first of all check the gear lever spherical bearing and the plastic saddle.

The plastic saddle just clips onto the selector rail, long nose pliers will deal with it, you can get better versions from Steve, he offers a sintered metal version

Thanks Neil, but are you saying that Phil doesn't know his way around this box?

I'm saying neither of the things mentioned in #16 would cause the symptoms you describe and any specialist should know that too.