I'm looking to fit ITB's to my 2015 Caterham 7 420R SV (Duratec engine). The Caterham roller barrel throttle bodies are seriously pricey at 4K. Now I'm new to the caterham world, but in the past have modified other cars and know they ITB's are usually around 2k.
I would be interested to hear other owners feedback on the caterham RBTB's and if they believe it was worth the 4K. Then I would also be interested to hear if anyone sourced ITB's elsewhere?

Besides the roller barrel kit with fittings, filter and TPS, the Caterham kit also includes upgraded injectors (standard ones are maxed out on plenum system), new ECU with RBTB map and fitting by Caterham. These all need to be factored in for Jenvey and other installations, bringing the prices a lot closer, as the non-Caterham installation will probably require a rolling-road tuning session, too.

It cost me a little less than CC would have charged at the time but got me better quality injectors, loom, TPS and carbon trumpets.

A full RR set up and re map was included.

It transformed the car; from an erratic idle it went to rock steady 850rpm tickover, it will pull away with no throttle (albeit slowly!) and is a pleasure to drive in all circumstances.

Well worth the cost IMO. Luke was great, gave me options on the various parts, sourced them all, fitted and set up and returned the car running perfectly. No issues at all.

#2 Aero, correct me if I'm wrong, but the Cateham map is a generic one.  Caterham don't, and wont, actually map for the individual car on a RR.

And the Caterham ECU is locked, so cannot be mapped by another tuner.

Why they only provide locked ECUs is another question to ask at the Webinar.

Here's a couple of pics of my completed installation. 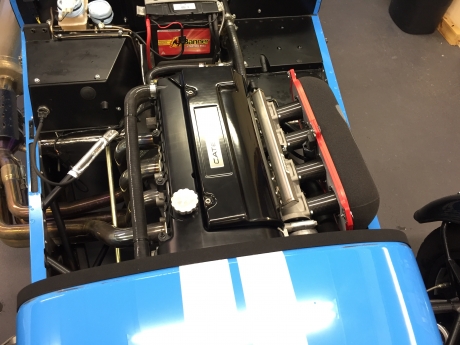 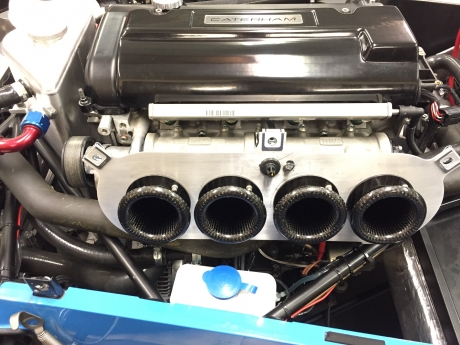 But you say your Caterham ECU was not locked?

It was locked, yes. Then unlocked and remapped. There are some who can do that.

I had my 2017 SV 420R done by Caterham last summer and the cost was just under £ 4k fitted including a Cat bypass, as Scott says they remapped it as well to suit the new set up. The foam filter assembly is now Carbon not plastic so they must of changed it since Scotts was done.

Manufacturers lock the ECUs to stop people messing around and causing issues then going back and saying something has broken when it’s not a manufacturing problem but something they have caused.

Mrp, do you mean the backplate for the filter?

I went for slightly longer, carbon trumpets so the carbon backplate that CC use wouldn’t have fitted which is why I have the alloy one.

The whole lot was sorted out by Luke Stevens and another mate who has been designing engines for years, and designed to fit nicely under the hood.

Apologies to Rich 420R if this is dragging the discussion off topic, but...

I had my engine "refreshed" by Caterham.  To their eternal credit, they did it under warranty.

I asked them if I could pay to have it remapped while they had the car, but they refused and, unless I completely misunderstood, told me they do not do mapping.