I was looking at somebody else's engine last night. Didn't get to spend too long on it but it had me confused:

Engine wiring loom highly suspect, has been the cause of numerous previous faults, to be replaced. No obvious faults right now.

Symptoms started after 2 sessions at a track day. Engine idles normally when cold, but as soon as it starts to warm it abruptly switches to a rapid surging idle. Doesn't come on slowly, just switches. Revs then cycle up and down sharply several times per second. And it's not just wandering, it's almost like the engine is being switched on and off twice a second in a very regular pattern. It then continues to do this at all throttle settings and engine speeds. Completely undriveable as it just surges all the time.

First thoughts were TPS wiring but all looks OK and checks out correctly and ECU reports the correct TPS values; 3.92% calibrated closed, smoothly increasing to 82%+ at WOT. No change in TPS reading during surging.

Next thought was manifold air leak but no signs of anything, and this would normally only affect al idle and low throttle, this persists at all throttle settings.

Lambda senor voltage looked odd on my OBDII scanner (but I hadn't got my "good" scanner with me, this one is a bit Mickey Mouse). Seemed to be mostly showing low voltage all the time indicating lean, but on the other hand the ECU was reporting that is was switching correctly to closed loop so was seeing apparently normal lambda cycling and was able to bracket the correct mixture. So I hooked up a scope to the lambda sensor signal pins and saw this: 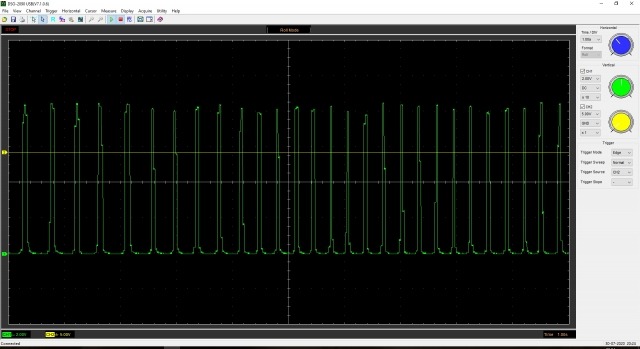 Well it's cycling alright but it doesn't look normal. Normal on a K is more like this at 2500rpm hot:

So wandering between rich and lean, spending roughly equal times each side. And at idle it's usually more slow to respond and hesitant like this: 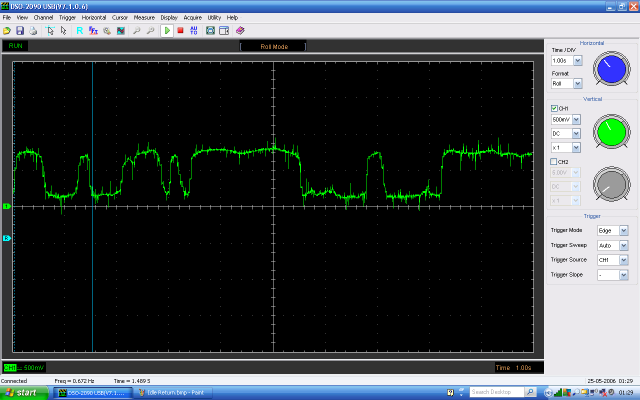 This engine was cycling 3 times per second, on/off, mostly on the lean side with just abrupt pulses showing rich.

It suggested to me that the ECU was indeed turning the injection on and off rhythmically and "rich" bits corresponding to "power on" and the "lean" bits were the cuts. A bit like it does when it's on the rev limiter.

We tried disconnecting non-essential sensors and actuators just to see if it stopped the surging.

Unplugging temperature sensor, TPS, lambda sensor, IACV (even physically blocking off IACV) had absolutely no effect at all.

The only other thing which looks odd ws the MAP readings on OBDII but not sure what was cause and effect here. Sensor seemed to be reporting broadly sensibly, reading 100kPa with the engine off and about 31kPa when it was idling smoothly, but was fluctuating all over when it was surging, as high as 65kPa at points. Now if the MAP sensor was going haywire it would make the engine run pretty badly. The other possibility is that the MAP was actually fluctuating with the surging RPM, but I can't convince myself that a surging RPM could lead to MAP RISING to around 65kPa at points with the IACV physically plugged. The engine will continue to suck, there's nothing allowing the air flow INTO the manifold to fluctuate dramatically, so how come the pressure can pulse upwards so far?

This leaves me with two ideas at the moment:

Long shot but did you check fuel pressure ?

Top
31st Jul 2020 - 22:24
#3
revilla
Offline
Last seen: 56 min 13 sec ago
Joined: 17/04/2014
No I didn't have time or facilities. I was working somebody else's garage away from home. But it was something we discussed. I have a spare fuel inlet hose with an inline pressure gauge so we could fit that and see. I did try squeezing the hoses while the engine was running and I wasn't 100% convinced it felt like the supply hose was pressurised to 3 bar but that was a bit unscientific. Decided it was unlikely as the ECU seemed to be going closed loop so seemed to be achieving the correct mixture, but having looked again at the lambda waveform I'm not so sure it was really happy. Definite worth a check, thanks.

Hopefully you managed to fix this Andrew, any further forward? I had a similar issue and found the cause to be the idle control screw was adjusted too high and out of range so under steady acceleration it was erratic.

From what the owner tells me, the car went to Midland Race And Rally and they found a crack in the inlet manifold which opened up when heat was applied.

I've not yet heard whether rectifying that resolved the issue as the car was having other things done while it was in.

In many ways it fits the symptoms observed; I'm just stlightly surprised that it seemed to continue to have a significant effect at higher throttle openings from what the owner described.

One to file away in the mental library for next time! Hopefully that will be the sole cause and it will be resolved.