Posi-tap connector to wire in a DRE shift light?

Got a DRE shift light for my birthday (my wife is a star - no socks for me!), and having rummaged around under the dash I think I've found a couple of spare connectors to get switched live and earth, but nothing spare for the pulse signal.  I'm probably going to have to tap into the wire in the loom for the tacho.

Has anyone used Posi-Tap connectors for this?  Seems that they are widely used for motorbikes (lots of mentions of them on motorbike forums) and apparently are resistant to vibrations and moisture.  Looks like a good solution if I want to remove the shift lights in the future, rather than soldering and shrink wrapping.

Found a short video of the posi-tap in action (https://www.youtube.com/watch?v=TA3q_8UYpm8) - looks like it could work?

Also, just checking that I've got the right wires in the pics below.  Those are the two spare connectors I found - I got very excited at the one on the left until I got closer and realised the wire is grey, not white

The one on the right I assume is the green & black (live and earth) that I need. 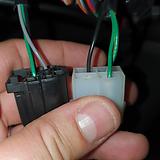 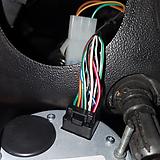 By 2015 the wiring diagrams published in the build manuals where way out of date, they where with my 2011 ex-academy car.

Caterham uses "commonly used British car wiring colours" so a reference like this https://www.autoelectricsupplies.co.uk/page/commonly_used_british_vehicle_wiring_colours will help a lot.   Obviously checking with a multi meter is the best approach.

As a 2015 car, I would imagine your car is fitted with the connector for the sequential shift light option,  The connector should be identifiable by the White/Black wire which is the tacho feed, and should be in the area your looking (i.e. behind the tacho, near the steering column)

Chris - had another dig around behind the speedo and found these - does this look like the spares that you found?  There are 2 black, 1 green and 1 white/black there.  If they are the ones I'm going to have to work out how to get the tape off without damaging anything!  I may have to take the windscreen and scuttle off 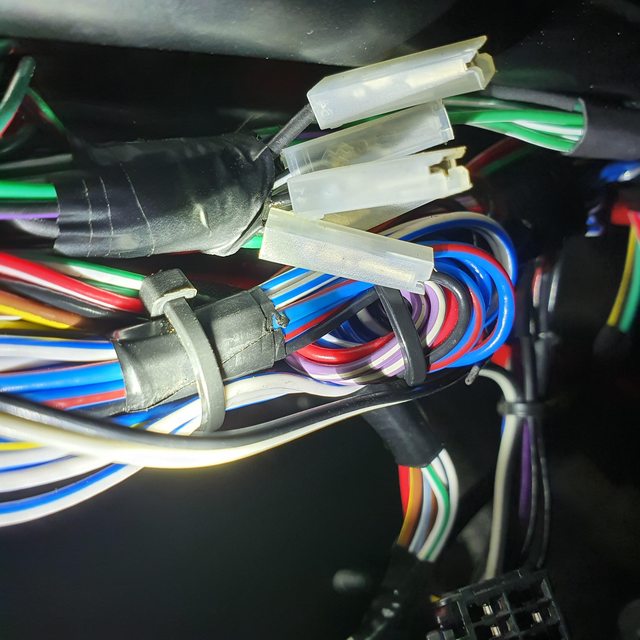 Yep looks like you have found them.  Black is your earth. Green 12v +ve (Ignition switched) and White Black the tach feed.

Sorry, back again.  Got the tape off and the spare connectors out of the loom (without breaking anything else I think - result!).  However, looking at them they would seem to be black with white rather than white with black.

Wiring isn't my thing (give me a computer to build or software to write any day).  However, looking at the wiring diagram and the colour code wiring above, as well as copious searching on here, it would suggest the spare wires are not the tacho signal ones I need.

The photo below shows some of the spare wires.  Theres a handy green for ignition switched power on the right, a nice black for earth in the middle, but the two other wires look black with white stripe to me. 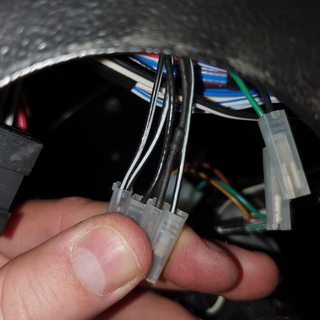 Below is the tacho loom and there is a very obvious white with back strip wire on the right - much more white than the pic above. 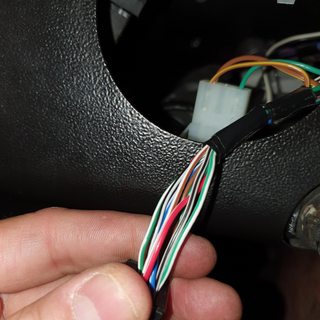 Here's a closer pic - see the white with black stripe lower down; there is a white and back wire between my fingers that has more white than the spare ones, but less then the one with the thin back stripe. 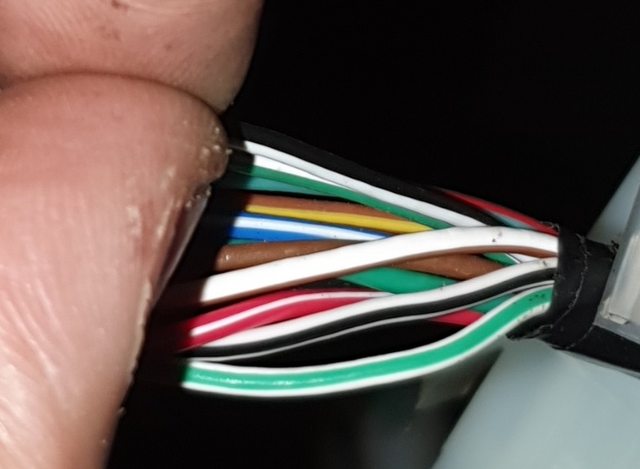 From all this, my assumption is that :

- Spare live and earth are fine, I can grab those easily.

- I'll have to tap the white with thin back strip wire above to get the tacho signal.

Another quick update - it seems that the tap connectors don't provide enough of a connection to get the signal so I'm going to have to cut and crimp in which is annoying.

Power and earth are fine though, just not getting a signal at the moment.