toothed wheel - what is it for?

There's a possible supplier mentioned in this thread (see posts #10 and #12), and the I/D of the reluctor ring is quoted there as 72.6mm.  To get some made up, it seems that a CAD file would be needed?  I've no idea how that works.

Maybe there's some scope for a Bulk Buy?

"To get some made up, it seems that a CAD file would be needed?  I've no idea how that works."

We'd need someone to create a sketch with dimensions, and someone to do the CAD. Those could be the same person.

The CAD is widely available on a commercial basis but IIRC when this has come up before we've had Members who have offered. There might be something relevant in the threads about 3D printing.

I'm coping this from my post on the other thread.

Clive has been kind enough to send me a reluctor ring - thanks Clive.

I only possess a very cheap set of digital callipers, and have nothing to check their accuracy against, so I have measured several times in the hope that my results are consistent with the same kit.

I hope this is of some use to someone.

What is the width of the gap between the teeth?  I can produce a 3D cad model if anyone needs one, my car doesn't have the ring for me to check though.

Apologies, I didn't register the question.

4mm between the teeth, and about 2mm depth of teeth?

Depth of teeth is proving the trickiest to measure with these rubbish calipers, I'm trying to find someone locally with an accurate set.

This is getting interesting!

If you could measure the following dimensions accurately, that would give tooth depth:

That might not be so simple, however, as there are 43 teeth, so teeth (and gaps) are not precisely opposite one another.

This photo of the reluctor ring (courtesy of ChrisC) suggests the ratio between gap and tooth is about 7:5: 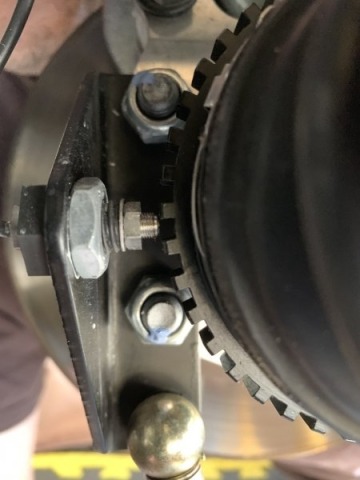 Is the number of teeth actually that critical? I would suggest that it is not.

A few years ago, a friend's speedo was not working. We found that the gearbox driven sender was actually OK, but was not being driven by the gearbox. The quill was OK, as was the plastic driven gear, but the driven gear was not engaged with the worm gear on the gearbox output shaft. Rather than removing the engine and 'box to rectify the root cause, I fabricated a bracket to mount a proximity detector to count diff input drive flange bolts (actually, every other bolt, as the four bolts are not equidistant), and wired to the original wiring. Then, with a little trial and error, the speedo was recalibrated to read accurately. The speedo action was normal despite only around 8 counts per wheel rev.

I feel like there are frequent posts about problems with speedo readings, either due to flex of the bracket, failed or out of adjustment sensors, or damaged wiring.

I would suggest that a redesign could massively reduce these issues. The sensors seem way too sensitive to adjustment to me. I would go with a larger diameter sensor, with a greater sensing range, mounted on a bracket from the diff, and use a toothed ring on the inboard end of the drive shaft with a much reduced tooth count. Whilst not to drive a speedo, We're using a similar setup on my sons hillclimb car (for traction and launch control). Our sensors count 16 teeth, and still work effectively over a range of adjustment of over 1mm.

I would not worry about having to shrink fit rings to drive shafts. I would secure the rings to the drive shaft with three roughly equally spaced grub screws.

For reference, I knocked up a rough CAD drawing and got some quotes from https://www.fractory.com/

I would not think the number of teeth is critical for a functioning system; it might well be more stable at higher speeds though a little less so at slower speeds.

In the past I've had race cars with various data logging set ups and the wheel speed sensors have often run off only 4 or 5 'teeth' but slower speed accuracy was never much considered.

The problem might be whether the speedo code has the range with only a few signals.

Is the number of teeth actually that critical? I would suggest that it is not.

I'd agree.  I'd surmise that our reluctor rings started life as ABS ones (but I still haven't identified a source).  To be ultra sensitive to fluctuations in wheel speed, ABS rings need lots of teeth, but that doesn't necessarily apply to our speedo application.  I guess we could easily get away with fewer teeth, although I don't know what effect going to, say, 20 teeth, would have on speedo performance -- in particular, the steadiness of the needle over a wide speed range.

I feel like there are frequent posts about problems with speedo readings, either due to flex of the bracket, failed or out of adjustment sensors, or damaged wiring.  I would suggest that a redesign could massively reduce these issues.

The problem might be whether the speedo code has the range with only a few signals.

That's an interesting point.  To take an example, CC's recommended 6-digit code for the 195/50-15 ZZS of 038812 (pulses/mile) equates to 902/tooth, so a 20-tooth ring would need a code of 018052.  And we know that, when the leading zero is inadvertently overridden by a 1, the displayed speed slows right down to a crawl.  There seems to be plenty of scope in the range of possible of values.

Anyway, I don't personally need any reluctor rings, but there must be scope here for a Bulk Buy of either the usual 43-tooth ring or some other design?