28 posts / 0 new
Last post
11th Aug 2021 - 15:34
#1
revilla
Online
Last seen: 1 min 3 sec ago
Joined: 17/04/2014
Tyres (yes ... again ...)
170bhp SV. Road use only. 15" rims. When I got the car it had dreadful hard old CR500s. I swapped to Toyo R1Rs. They were quite sticky but for some reason I found it tramlined and wanted to weave around. In the end I went to harder T1Rs and quite liked them. They didn't have anything like the same level of ultimate grip, but I quite enjoyed feeling the car moving around a bit. Roll on a few years I'm struggling with them a bit. I think they've just gone a bit hard with age, but they're definitely rather more prone to locking up and when blatting with others, trying to keep up round some corners I'm ending up looking like a drift car! I could just get some more T1Rs, but I fancy trying something a bit softer with a bit more grip (the T1Rs have got almost as much tread on them now as they did 35,000 miles ago). I don't do track at all so I don't need ultimate-grip performance tyres; and while I'd like a bit more grip I'd rather not have something that hangs on until the last minute then chucks you in the ditch! For road use and touring I want something that will handle a bit of water too, so semi-slicks. I don't want to swap away from 15" rims. I don't want to break the bank. ... and I'd like to sort something before the fish and chip run in September. Suggestions and experiences please? Cheers, Andrew

On my car, there is virtually no clearance between the bracket for the cycle wings and the tyre. I bought an additional set of Caterham 10 spoke rims and tyres fitted with 195/50/15, but they fouled the bracket on the front. Of course, no problem on the rear tyres.

Switch to 13" wheels Andrew - much better all round!

Hope to catch up with you at the Fish n Chip run...

The Nankang AR-1s are definitely a semi slick with very good grip and are available in 195/50-15 size. I was skeptical about buying these tyres at first, but needed a set at short notice after cording my tyres on a track day and had another one coming up, so bought a set in 185/60-13 front and 235/45-13 rear. 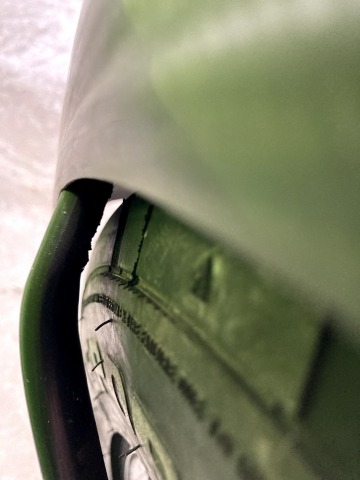 Also, on 15s and CR500s and looking to change (tyres not wheels).  It feels like there should be a guide to wheels and tyres.

I just checked on this excellent guide produced for the club by Avon tyres and ZZS are available in 195/50R15. These would meet your criteria I think (apart from the cost bit maybe). I normally wouldn't recommend a tyre I hadn't driven on but a lot of the club sprinters use these as do some of the racers but they still have a "proper tread" on them.

I use Kumho V70A in a medium compound for road/track use and supersoft compound for sprinting.They are a good tyre but the sidewalls are a bit stiff for some people's taste in road use. They do have a bit more tread than some of the semi slicks.

If you find any tyre tramlining on the road then you could try a tiny bit of toe-in on the front. I prefer a fair bit of toe out these days as it's mostly used on track but in the past I ran Yokhama A048R and they tramlined quite a lot but a smidge of toe-in helped.

My only concern with the 50 profile is the size of them, and if they'll actually squeeze under the front wings. I was doing a comparison t'other day via this site and I'm not 100% sure they will. If anyone knows for sure, that'd be fab to know.

I have Toyo R888R fitted to 15" wheels on an SV and they fit the front wing stays. (I did tweak them slightly to give a little more clearance to the rear part of the bracket to increase the clearance from circa 3mm to around 8mm - and also make the clearance the same on both sides)

These tyres are in my opinion much better than the admittedly old CR500s that were on it before. I have also found these to be ok in the wet surprisingly.

I'm also trying to choose a replacement 15" tyre.  Went from T1R to Yoko AD08R last time which was an improvement, both 195/50 and clear the wings and stays by a few mm.

I do some track days so looking at semi slicks this time, R888R are the front runners as I've driven a car with them on and really liked them.  I am intrigued by the Zestino Gredge 07RS soft compound https://www.demon-tweeks.com/uk/zestino-gredge-semi-slick-tyres-2012154/

Nankang NS-2Rs are also on my shortlist as I've heard a few positive reports, the AR-1 seems a little extreme maybe for when I get caught in heavy rain.

The AR-1s are clearly named after me

but they do look a bit hardcore ... can they really handle the wet?

I don't deliberately take the car out in the rain but on longer planned trips you often don't get the choice so I at least want something that would remain safe.

The ZZS may be OK but they are a bit more pricey. I must say the R888Rs could be tempting, especially if you (Orange) are able to say they handle OK on the wet.

There seem to be some good prices out there for them too.

Anyone else got any experience of R888Rs?