What are the pitfalls of raising my engine to stop the sump grounding?

Offline
Last seen: 2 days 4 hours ago
Joined: 17/04/2014
What are the pitfalls of raising my engine to stop the sump grounding?

I'm considering raising my engine slightly to try to avoid quite so much grounding of the sump (I've done less than 2,000 miles and 'touched' the ground 3 times!) and I'd be interested in other's experiences and observations. Clearly raising the centre of gravity is never a good thing, but the engine really does seem too low right now.

My plan is to fit James B's cunning "sump guard ramp" to the car, but on starting this project, I've discovered that my sump is around 10mm lower in the chassis than James's was. 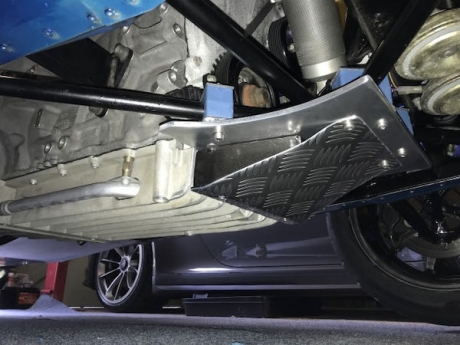 What I've done so far is check the ride height, tyre pressures, suspension settings, etc. The car is currently 147mm ride height at the front, without me in it and the CSR factory spec calls for 140mm-145mm. The car drops ~2mm at the front with me in it. Also without me in it, the lowest point of the sump is 73mm off the ground: 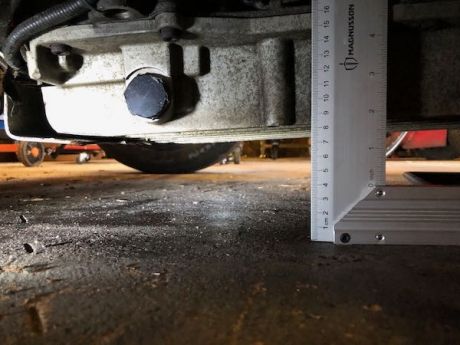 I've checked the clearance between the bonnet and the cam cover and it seems at the closest point that I have around 12mm of space: 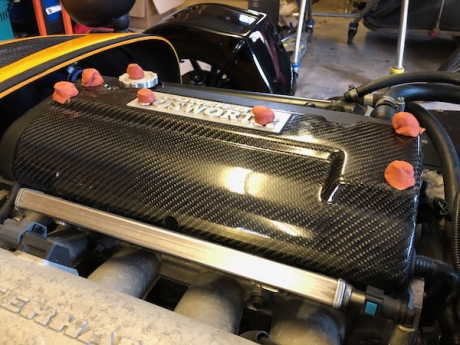 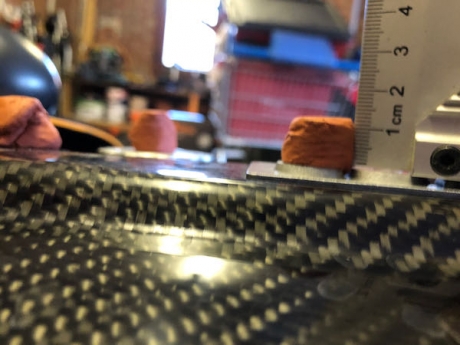 I've checked the engine mounts and they both seem to be OK, the rubber hasn't collapsed or anything allowing the engine to drop. I've also experimented with the implications of changing the angle of the flywheel relative to the diff with this Heath Robinson device: 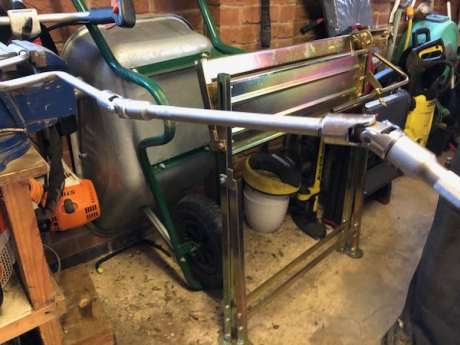 and satisfied myself that changing the angle of the engine very slightly isn't going to put silly loads on the propshaft. I also checked the path of the steering column through the engine compartment and I won't run into issues with exhaust headers, etc.

My current thinking is to raise the engine around 6mm at the front, by putting washers above the rubber supports in the front engine mounts, which will bring the sump to around 80mm off the ground, but still leave 6mm of clearance under the bonnet at the closest point.

Am I missing anything, or about to do something really stupid?

Have you not got adjustable platforms? Would it not be easier to raise the car 6mm all round?

David - I have and I could, but the car is already at the very limit of the Caterham specification for ride height and whilst raising the engine would raise the centre of gravity slightly, raising the whole car would have a much bigger impact on all things handling. This is all me being too fussy probably, after all the car has done 20,000 miles with the engine at it's current height, including going all the way to Greece on some very bumpy roads!

The correct but more involved and expensive solution is to increase the clearance underneath .... a Raceline DS give you 35mm more clearance on the leading edge.

If you do raise the engine you may also have to trim the side skin for the primaries and realign the exhaust.

Adjusting the suspension is easy to do and take for a drive. Raising the height of the engine is also deviating from the standard settings with unknown result after a lot of work. I'm pretty sure you couldn't notice the handling difference if you raise the car 6mm all round. Tempting fate but I've never bottomed the sump (which has 80mm clearance unladen) but I do catch the chassis hoop that sits under the bellhousing on early models when crossing some speed humps.

I am surprised you feel it's necessary to adopt a solution that clearly no-one else has up to now felt necessary, apart from set up, have you ever considered increasing the spring rates to stop the bottoming?

I'm running the same engine and Cosworth sump (R400 version of it) in an S3 chassis and had a similar problem - mainly due to competition work requiring a lower suspension height.  But you can raise the engine with spacers on top of the engine mounts and also drop the gearbox mount to raise the front of the engine (it tends to tilt down at the front). The limiting factor on mine was the bonnet height but you can make a hoop to hold the nosecone higher. There was also an issue of my gearbox getting 'close' in the tunnel. Of course, changing the tilt of the engine has implications for the prop shaft and how smoothly it will run, but it's probably not great on the original design either.

Thanks all for comments. 7-Wonders, I have plenty of space around where the exhausts exit the body and by the chassis bars there and whilst a Raceline sump looks amazing, I'd rather spend that sort of money elsewhere! My thinking here is that clearly CSRs are limited in numbers and they do all appear to be slightly different. Mine is number 28 and one of the early CSR200s. The reason that I'm now considering this is not to get the car miles away from 'standard' (which is less of a thing on a CSR), but actually to get it more like other CSRs.

Bottom line - the sump hits the ground occasionally on local roads at 'normal' speeds, well below the speed limit. Both David B and James B have/had CSRs with 80mm under the sump (& little/no experience of grounding the sump), with standard ride height and springs. Mine has 73mm (well 71mm with me in it!). It also has what seems like a larger than usual gap above the engine, all of which suggests that the engine is just a bit low. My instinct is to follow David L's route and just tweak the height of the engine up a bit at the front.