Which Sigma do I have?

Newbie here. Advance apologies if this is a common one and I'm just being dumb! but I've had a bit of a search, and can't find the answers. So hoping to tap the collective knowledge...

Very excited as I have inbound, a new (to me) Sigma engined 7. My first.

I'm trying to work out if its the older Fixed Cam variant, or the later Ti-VCT with the variable timing. Is there an easy way to tell? Without taking the head off of course...

I'm told my car is a late sigma Ti-VCT with 140bhp. It was first registered in 2016, but was an owner built kit, so presumably left the factory a year or two previously. Curiously it has Roadsport badging, but is being sold as a 270 - which I thought would mean 135 Bhp??

Trying to work out what it actually has under the bonnet! I'm buying from a well regarded 7 specialist so  I'm not worried. Just independently checking the details and learning...

Any facts gratefully received. Looking forward to years of ownership and membership!

Welcome Kris - I bought an old xflow so can be no help at all with your questions but whatever you have got you will enjoy it!

Apparently, You can identify that it has Ti-VCT engine by the 2 camshaft control actuators situated on the front of the engine.

Offline
Last seen: 5 hours 33 min ago
Joined: 17/04/2014
Yep, the Ti-vct engine is 125 in an academy car, 135 in road sport and 152 if a 310 upgrade, all 3 have the air box. Fixed cam is 125 has air filters on the throttle body, the 140 has the air box to outside, the 150 with indiviual throttle bodies and a very slim air filter over all throttle bodies. Look for the cam solenoid actuator at end of cam covers, that's a Ti-vct if it has them Post a picture of the top of the engine. Welcome btw

Thanks all really helpful. And thanks for the welcome!

@gulf juliet tango, I'll certinaly check in with Martin - thanks for the tip.

going by the other comments here:

Its definatley not a 125 Academy car, and has no air filers on the throttle body - so thats ruled out.
It doesn't have individual throttle bodies, but the plastic manifold - so its not a 150 either.
It doesn't have the 152bhp 310 upgrade label on the rocker cover, while it could hve been left off, its not likley to have had the 310 kit... Though that would show it was a Ti-VCT if it did!

Here is a small (sorry couldn't seem to make it bigger) shot of the engine. There looks to be actuators and the end of the cam cover - same end as the distributor?Look right to you @K7 VCT? 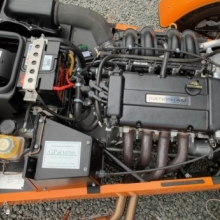 Perhaps I'll need a Rolling Road to confirm the 5bhp either way!

Offline
Last seen: 5 hours 33 min ago
Joined: 17/04/2014
So it's a 135bhp Ti-vct sigma. Only way to tell would be rolling road or check on map on ECU I guess. I guess it's a 135 as the cam cover badge is part of the upgrade. Can you check with Caterham or dealers if it's been upgraded via the chassis number or number plate ? If it's a 135, o recommend the 310 conversion with a lighter flywheel....