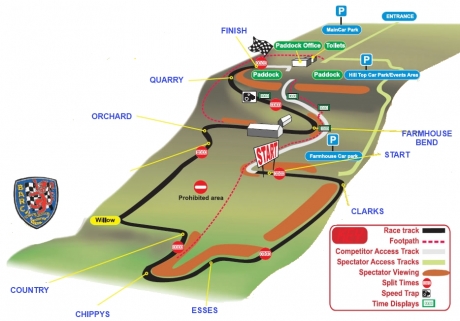 Start
The well organised marshals collect competitors from the paddock and direct them down the steep road down to the start line. Tyre warming is allowed before the start, but there is sometimes a delay between warming and starting, so don't rush! The Start line is a concrete pad which can be slippery in the damp, but is grippy in the dry. From here, a short straight leads to Clark's.

Clark’s
A 90 degree right hand bend falling down hill. Settle the car then turn in late, taking in plenty of rumble strip.

Esses
This is a right / left section, still slightly down hill. Enter from the left of the track, turn in late for both sections, clipping the apexes, but avoiding the marker posts. Brake in a straight line for Chippy's.

Chippy’s
A long right hand hairpin at the lowest part of the course. It is easy to take too much speed into this corner and end up running very wide on the exit.
Country    Cresting the brow, Country appears very quickly. Judging braking is important. It needs to be completed at or around the crest before the sharp left hand Country. Turn in late from the right hand side of the track to achieve good drive out for the next short straight to Willow.

Willow
Willow is a 90 degree right hander. Care is needed as the inside of the bend has a tall rumble slip and the outside has a hedge protected by large foam blocks. Approach from the far left of the track, turn in and apex very late, being careful to avoid the hedge!
Orchard    Orchard is an uphill right hander. It is possible to take a fair amount of rumble strip / grass on this left Care is needed, however, not to unsettle the car too much.

Farmhouse
A quick blast through the farmyard braking as the buildings end, leads into Farmhouse bend, a long uphill left hander. keeping near the middle of the track initially, hitting a late apex before drifting wide as the corner straightens out.

Quarry
Probably the most difficult corner to get right. It is approached at speed and is a long, rising  right hander which tightens towards the end. It can almost be treated as 2 bends - a gentle right hander, a short straight and a sharp right hander.